Okay, true confession time: I don’t really want to be in charge of my own space freighter. Fraught with peril, that line of work. Hauling cargo this way and that throughout the known galaxy? Dealing with cranky dock personnel? Constantly worrying about theft and backbiting from competitors? No thank you. The hours suck and the pay sucks even worse. Even though it’s a dirty job, someone has to do it—which is why I so very much adore characters who are captains of one. This is especially true if it’s the heroine in a science fiction romance. 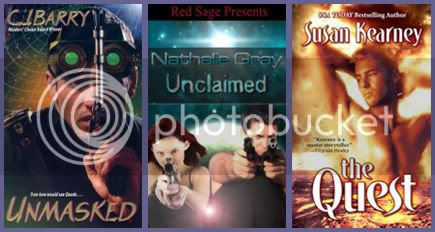 In the past six months, I read UNMASKED by C.J. Barry, UNCLAIMED by Nathalie Gray, and THE QUEST by Susan Kearney. I didn’t read them because of the heroine’s occupations; it simply turned out to be a happy coincidence. And recently I learned that the heroine of Linnea Sinclair’s forthcoming short story, Courting Trouble commands her own freighter. Each of the above stories prompted me to reflect on why I become so excited whenever I read about a heroine in that line of work.

First of all, who is she? A heroine space freighter captain is frequently an underdog character. That aspect probably holds the most appeal for me. She’s an invisible, underestimated member of society. She is often poor by the standards of her time, which means her ship usually needs repairs she can’t afford and she has to fight for valuable contracts tooth and nail. Trouble always seems to find her—or she makes trouble for herself by virtue of her sassy, brassy attitude.

This scrappy heroine is tough, independent, and stubborn almost to a fault. She’s also intimately familiar with the ins and outs of a space freighter, which speaks to her technical savvy. Since said freighter frequently breaks down, ingenuity is a key survival skill. I think the heroine space freighter captain is a close cousin to space pirates because she often skirts the law or comes dangerously close to doing so in order to survive. She strikes me as a real women in extraordinary circumstances.

To overcome her challenges, she has to think quickly and act even faster. Danger arrives in the form of pirates, evil corporations, and oh yeah, the hero. Scenes in which she scrambles about her ship to reinforce its defenses—or simply persuade the gosh darn hunk-a-junk to start—leave me in awe. Plus, she gets to wear cool tank tops ‘n stuff. I think I get excited about that aspect almost as much as the hero!

In my lifetime, I will never, never, ever, most definitely not ever have the pleasure of traveling aboard a starship. I will never know how to fix a hyperdrive engine or its equivalent (although should we reach such a level of technology, I wonder if fixing a starship engine would in effect translate to the equivalent of repairing a car engine of today. Still, the idea of tinkering with a space freighter sounds so much more exotic!).

It’s a thought that makes me feel sad, until I remember that I can accomplish such a feat—in science fiction romance. I think it’s why I never tire of reading about dilapidated space freighters and the heroines who love them. That, to me, is an indelibly sacred experience.

What about you? Are there any particular jobs of the future that fascinate you?