Romance Heroines of the Future 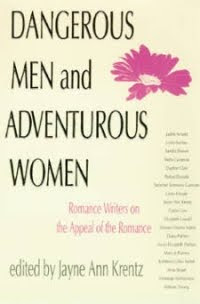 Some of you may remember a previous post in which I discussed the appeal of the subversive heroine. Upon further reflection, I realized I hadn’t fully processed nor articulated my thoughts on the issue of heroines in science fiction romance and my expectations for them.

Hence, more questions arose, the main one being, will we ever see a fundamental shift in one of the dominant conceptual elements in romance—specifically, the pairing of a dark, dangerous (Alpha) hero and innocent heroine?

Given that the innocent heroine frequently has a reputation for being thinly crafted (in other words, the hero comes across as much more compelling), what does this historical pattern imply for science fiction romance? Will authors and readers ever embrace other templates—on a regular basis—when it comes to SFR?

With those questions in mind, I went exploring.

First stop: Bev’s Books, which featured posts about the issue from the perspectives of The Old “Placeholder Heroine” Myth and Placeholders and the Dual Perspective. After reading her discussions, I still had more questions, so Bev turned me on to DANGEROUS MEN & ADVENTUROUS WOMEN (1992), a collection of essays about the appeal of romance by a group of romance authors and edited by Jayne Ann Krentz. I read the book and pieces of the puzzle began falling into place.

A main point authors in this book reiterated throughout was the belief that, in essence, romances are about dangerous heroes and the heroines who tame them (hero basically defined as a man who is part hero, part villain. Heroine basically defined as sweet/innocent/pure/courageous). I realize much has changed since then (and am aware that the essays could not address the appeal of every single type of romance in existence), but there’s also the saying, “The more things change, the more they stay the same.”

I want to zero in on the role of the heroine. In Laura Kinsale’s essay, she refers to “placeholding” as

“an objective involvement; the reader rides along with the character, having the same experiences, but accepting or rejecting the character’s actions, words, and emotions on the basis of her personal yardstick…When the writer does fail with the heroine, however, it is quite easy for the reader to disassociate herself from the character and continue to derive pleasure from the story by using the heroine as placeholder.”

“in my essay I used the term placeholder to describe a FAILED heroine in a romance–ie, a heroine that the reader did NOT find admirable or interesting, who was Too Stupid To Live, and yet the reader keeps reading and even enjoys the book. My question there was WHY, and my answer was the sense that the reader could ride along with that character and think about how she herself would act in the failed heroine’s place.

I said in my essay that in a successful romance the reader will strongly identify with BOTH the hero and heroine.”

For the purpose of this post, I’m going with Kinsale’s failed heroine definition of a “placeholder heroine.” To piggyback on her statement, I believe the basic core of a romance is the relationship, not simply the heroine’s courageous ability to tame the hero. To me, that seems like only one way of executing a romance. I feel it’s important to emphasize this now because even though DANGEROUS MEN & ADVENTUROUS WOMEN was released in 1992, the beliefs therein are reflected in current books (especially paranormal romance) as well as beliefs about the market. For example, Mary Jo Putney writes:

It is much rarer to see the heroine saved by the love of a good man. It is possible to write a romance where the heroine is more tortured than the hero, and I have done so, but it is more difficult and probably less “romantic.” To make a tortured-heroine romance successful, the hero must be a compelling figure in his own right, not a passive foil for the heroine’s problems. While he is supportive and understanding, he must have a role beyond drying her tears or the story fails as a romance.”(p. 101)

So we have two possible scenarios—one with a failed heroine and one with a failed hero. Both can happen. More importantly, both can be avoided (easier said than done, to be sure). Readers can identify with heroes and heroines in stories simultaneously. But even if most authors and readers agree that a successful romance involves both a well-crafted hero and heroine regardless of who is taming whom, why is there such a preponderance of the dangerous hero-innocent-heroine dynamic? 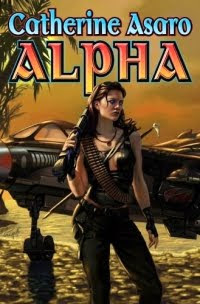 I take extreme issue with the belief (not with Mary Jo Putney!) that tortured heroines make for “less romantic” stories. Especially since Catherine Asaro’s heroine Alpha from the book of the same name is one of my favorite tortured heroines. ALPHA was utterly romantic. Imho, the hero of the book was highly compelling and he was far from Hanky Boy Sidekick. Given the rise of urban fantasy, with its signature tortured protagonist who is frequently female, it seems to me UF answered the call from readers ready to evolve beyond the failed heroines of yore (many of which seem to fall into the innocent/Too Stupid To Live category).

I question why we don’t see more tortured heroines, and I have a high expectation to encounter them in science fiction romance. Here’s what appeals to me: tortured heroines with character arcs that demonstrate their willingness to embrace their capacity for love and nurturing—whatever form that love or nurturing might take. In the future, this could entail the heroine leading a military space fleet against invaders in order to save the hero. Said action would not emasculate the hero. At all. Rather, it makes the heroine That. Much. Cooler. I find the above scenario just as romantic as one in which the hero rescues the heroine. And the heroine doesn’t even have to be tortured. Just lose the innocence, because I’m not sure I buy its existence in the future (unless the story truly calls for it, in which case the author has some serious ‘splainin' to do).

As long as the tortured, dangerous heroine is a sympathetic character, undergoes the same emotional transformation expected of her hero counterpart, demonstrates growth, and finds redemption, there’s no reason readers can’t accept such a character on a regular basis. Why they don’t probably has more to do with individual reading preferences, cultural dynamics, and the marketing of romance than the stories themselves.

To belabor the obvious, many SFR characters live in the future. There’s the rub. Perhaps one reason science fiction romance has had a challenging time discovering the sweet spot that would engender wider appeal is its progressive ideas (or at least the potential for them). I, for one, like to assume that in the SFR I read, a variety of social, political, and most of all technological changes will lead to a future in which women can more easily compete with men, protect themselves from male predators, and enjoy a higher level of equality than currently. In other words, it’s difficult to create a convincing case for a virgin heroine and/or the sheltered innocence a similar type of character would represent hundreds of years in the future. Not impossible, but it’s a scenario I’d question more often than not.

As much as possible, it would be great to encounter heroes and heroines who act as if they live in their future rather than a milieu which reflects the culture of the time the book was written, or romance conceptual elements perpetuated by the romance community. It’s not always possible to escape such constraints, but I’ll award an “A” for effort anytime.

Readerly Desires and Aspirations at Teach Me Tonight