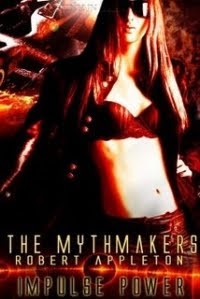 In Science Fiction Romance: A Male Author’s View, Robert Appleton (THE MYTHMAKERS) predicts that “Sci-fi romance babes are the next generation badasses.” He also points out that they are “…Sexy, take charge, equal to any man of the future.”

Rowrr! Don’t you know it! And right now, the author is having a giveaway. To win a digital copy of his space opera romance THE MYTHMAKERS, all you have to do is leave a comment for the post (the deadline to enter is 3/5/2010).

Anyway, a good portion of Mr. Appleton’s article focused on point of view (POV) in science fiction romance, which made me remember I’d wanted to blog about this issue. POV preference varies by genre/subgenre, and SFR is no exception. However, are there certain POV rules SFR romance authors must follow? Mr. Appleton states that sales demographics dictate the answer:

I’m not sure the above is entirely accurate. In the past, yes, it was typical for an author to tell a romance from the heroine’s POV. Since the late eighties, however, it’s been increasingly common for authors to employ dual POV, spinning the tale from perspectives that alternate between the hero and heroine. Authors and publishers learned that female readers enjoyed delving into the hero’s perspective, especially in stories in which the hero drives the story.*

I have a difficult time understanding why all science fiction romance would have to be told from the heroine’s POV. It’s a diverse subgenre, and I expect diversity in the storytelling. Lucky for me, authors are availing themselves of the various possibilities. For example, Catherine Asaro’s ALPHA is told entirely from the viewpoint of the hero. Linnea Sinclair’s HOPE’S FOLLY employs dual perspective. I found both books refreshing in that respect, but for different reasons.

In ALPHA, the heroine is an android. Telling the story from the hero’s perspective lent Alpha a mystery she wouldn’t have otherwise had. Plus, I question trying to tell a story from the perspective of a character who is actively evolving into a sentient creature. My guess is that she wouldn’t have been a reliable narrator. She barely knew what emotions were, let alone how to manage and process them. That’s what the hero was for.

In HOPE’S FOLLY, we are frequently in hero Philip Guthrie’s POV. For me, that’s a thrill because even though the author is female, I get the fantasy of experiencing a man’s growing love for a woman from his perspective. It’s especially satisfying if the hero is as sympathetic as Philip. My only gripe with the book is that

the love scene is told from the heroine’s perspective. I had become so invested in Philip’s emotional journey that I was really looking forward to the payoff of his response while making love to Rya for the first time. If Ms. Sinclair had employed dual perspective during this scene If Ms. Sinclair had told this scene from Philip's POV, I would have had my cake and eaten it, too.

Mr. Appleton goes on to state that “It’s funny, though, that female sf readers aren’t averse to sf with a male POV.” Which is me in a nutshell, so I understand my comfort level with SFR from the hero’s perspective has roots in my SF reading experiences, and may not be typical of many romance readers. However, I don’t think all romance readers would shy away from stories told from the hero’s POV, regardless of their reading backgrounds.

In the end, the important factor to consider is that romances are about relationships involving two people on an emotional journey. Isn’t it possible that dual perspective enhances the emotional payoff for the reader?

*While there are undoubtedly many articles and blog posts written on the subject, the topic was fresh in my mind since I’d recently read DANGEROUS MEN AND ADVENTUROUS WOMEN, a collection of essays on romance edited by Jayne Ann Krentz. See my earlier post here.