As you may have noticed, I decided to change the header for my monthly roundup in order to more accurately describe what these posts entail.

March is a busy month for science fiction romance, so let’s get buzzing! 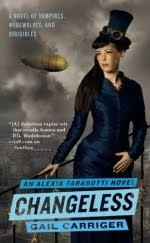 Alexia Tarabotti, the Lady Woolsey, awakens in the wee hours of the mid-afternoon to find her husband, who should be decently asleep like any normal werewolf, yelling at the top of his lungs. Then he disappears - leaving her to deal with a regiment of supernatural soldiers encamped on her doorstep, a plethora of exorcised ghosts, and an angry Queen Victoria. But Alexia is armed with her trusty parasol, the latest fashions, and an arsenal of biting civility. Even when her investigations take her to Scotland, the backwater of ugly waistcoats, she is prepared: upending werewolf pack dynamics as only the soulless can. She might even find time to track down her wayward husband, if she feels like it.

This is a race against time. Against oneself. This is the Vendée Globe, the most grueling race around the world. Singlehanded. No stopovers. On board is Laurel Benson-Desmarais, a thirty-six-year-old racer from a family of sailors. Five foot and a quarter inch of pure adrenaline junkie. One hundred and forty-seven pounds of thrill-seeking, motor-mouth, caffeine-addict of a woman who redefines the word “stubborn determination”. 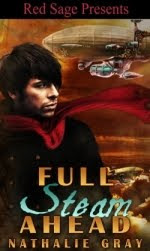 Laurel’s venture starts admirably. Day one of the race sees her well in advance. Until the meteorological forecasts start messing with her patience. The mother of all storms is gathering speed. Heading straight for the race. For the first time in its history, the Vendée Globe is annulled due to bad weather. She’s worked years for this but has to turn the boat around. She’s not fast enough. The storm catches up with her, tosses the 60-foot sloop as if it were a bit of cork. Electricity crackles in the air. Spray hits her like rocks. Then as she pitches into a mountain-size wave, everything changes. The water, the very air. As if she crossed over to another world. Crazy.

Phineas Hamilton, captain of the brigantine the Brass Baron, never thought he would one day run into a woman who physically looks like the enemy, with pale hair and eyes, but yet is not one of them. The exotic prisoner is also the most obstinate, argumentative, confrontational…and fascinating woman he has ever met. He does not really care where she hails from and what brought her to his ship—no one speaks to him that way. And certainly not on his own damn ship! A lesson in manners is most definitely in order. But for now, he must make sure his crew and ship survives the latest enemy attack. They all depend on him. Another link to the long chain he carries. 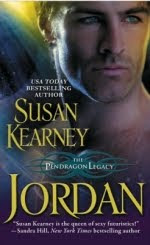 1600 years ago, Jordan was the sole survivor of a ruthless Tribe attack which annihilated his world. To stop the Tribes deadly galactic conquest from continuing, he followed the Tribes to Earth, assumed the name Merlin and assisted King Arthur and his Knights to save Earth. When Arthur died, Camelot fell and Jordan lost his Ancient Staff. Now, over 1000 years later, the Tribes are back and so is Jordan. He’s recovered his Ancient Staff and is again on the trail of the Holy Grail to save Earth and protect the galaxy.

Vivianne Blackstone is a lady with her own agenda. An American businesswoman, self-made billionaire and a fighter from the get-go, she’s confident, capable and a definite type A personality. One of Earth’s brightest and most loyal citizens, she vows to do her part to save the planet when she learns the Tribes are on the move again.

What a girl wants and what a girl needs are sometimes two different things…
For Melissa “Lucky” Chance, another stretch in Ganymede’s ice prison is nothing new. The flash-freeze that’s supposed to destroy her will only leaves her with an insatiable desire for the first hot body she lays eyes on. Except this time, she faces a death sentence. Her only hope of escape lies with the man known as The Butcher. 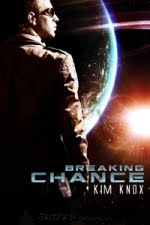 John Ramius understands the logic behind his conviction as a criminally insane mass murderer. No man should have been able to slaughter over fifty men in as many minutes, but no one sees the underlying curse that compels him to sense—and fulfill—someone’s deepest need. Chance’s skill will free him to kill the Sun-King; he will find no rest until he does.

As they run from the forces of the Jovian colonies, Ramius finds himself temporarily sidetracked, not only by Chance’s relentless desire, but by her underlying, unspoken need. Ignoring it—or his own compulsion to do every wicked thing imaginable to her—is not an option.

Only after all their defenses are stripped away do they discover that their meeting wasn’t by chance. Someone is manipulating them both, and the only way out is the path to their destruction…

WITH A TOUCH – Rhiannon Leith

Kidnapped by rebels…or rescued by love? 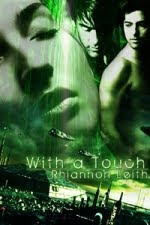 A chance encounter with Aidan, a sexy Guild Security Officer, rocks her to the core when she sees herself entangled in his arms. She fights the unfamiliar surge of lust and tries to focus on the job at hand, the interrogation of the subversive Rafael. Yet she discovers that he’s no terrorist. In fact, his capture is a ploy, a way for him and Aidan to infiltrate the Guild with one goal in mind: Eva.

Even as Eva dares to dream of a future with her lovers, she fears for their lives. The Guild wants her back. And that’s not all they want… 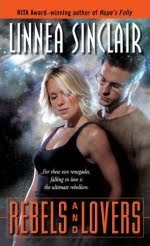 OUT OF OPTIONS…Devin Guthrie can’t forget Captain Makaiden Griggs even though it’s been two years since she was in his family’s employ. A Guthrie does not fall in love with a mere shuttle pilot. Going against his wealthy family’s wishes isn’t an option—not with the Empire in political upheaval, much of it caused by Devin’s renegade older brother, Admiral Philip Guthrie. The Guthries must solidify their standing—financially, politically and socially—or risk losing it all.

But when the Guthrie heir—Devin’s nineteen-year old nephew— goes missing, Devin’s loyalty to his family’s values is put to the test. And suddenly the unthinkable becomes the only option available: Devin must break the rules and risk allying himself with the one woman he could never forget—and was forbidden to love. 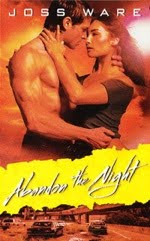 Everything they knew is gone.
From the raging fires, five men emerge with extraordinary new powers. They are humankind's last hope ... but they cannot survive this dark, ravaged world alone...

Quentin Fielding had everything. Money. Power. Women. But now that civilization is all but annihilated, Quent only wants one thing: revenge. Harnessing a strange new "gift," he embarks on a deadly mission to find the the man responsible for the chaos and destruction, the man he should have killed years ago: his father. Only one thing stands in his way – a mysterious, arrow-wielding beauty...

Zoe Kapoor is on her own quest for vengeance, searching for the monstrous fiends who murdered her family. Soon she and Quent join together, journeying through the ruins of the world they once knew as a desperate desire builds between them. Drawing closer to an enemy they never imagined, Zoe and Quent must abandon all fear, abandon all regret, abandon the night ... if they want to stay alive. 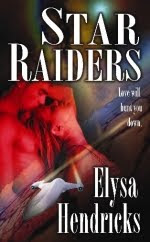 Found out about this new release from hanging around the Intergalactic Bar & Grille.) STAR RAIDERS will be released by Dorchester on March 30.

Like two ill-aligned stars, Shyanne Kedar and Greyson Dane were destined to collide. She was a smuggler's daughter, and he, an interstellar lawman. Their affair was scorching, dazzling ... and ended like a supernova, in a blaze of betrayal.

Ten years later, the flames haven't cooled. Shayanne's lush body, the twist of her lips and the fire in her eyes - all radiate the same magnetism that ensnared Greyson before, and now he's truly her prisoner. But as much as things have changed, they remain exactly the same. Danger threatens. Humanity's fate hangs in the balance. And though his tempting captor doesn't know it, if Greyson's plan succeeds, it will save mankind ... and lose him the only woman he ever loved. This time, forever.

Alien Romances lists the 2009 P.E.A.R.L. Award finalists. Congratulations to the SFR authors who made the list:

At Fall Under My Spell (adults only), Robert Appleton (THE MYTHMAKERS) guest blogs about 10 Sci-Fi Movie Love Stories To Cherish.

Natalie Hatch writes about the thrill of Falling In Love With The Bad Guy at Romance Writers of Australia (G'day, Natalie!)

Next month, LoveLetter magazine will feature a super happy special on steampunk romance. In addition to my column on the subgenre, there will be interviews and articles with authors, including Dru Pagliassotti (CLOCKWORK HEART), Meljean Brook (THE IRON DUKE), Nathalie Gray (FULL STEAM AHEAD), and Katie MacAlister (STEAMED).

Readers can also look forward to reading about the work of cover artist Timothy Lantz, who did the art for CLOCKWORK HEART, and delve into the mind of editor Theresa Stevens of Red Sage Publishing (editor of Nathalie Gray’s FULL STEAM AHEAD).

Read an excerpt of Meljean Brook’s steampunk romance novella “Here There Be Monsters” from the BURNING UP anthology (August, 2010).

Congratulations to author Sheryl Nantus who sold WILD CARDS AND IRON HORSES, a steampunk romance novella, to Samhain Publishing. It will hit the virtual shelves in August. In the meantime, here’s the premise:

Their loves rides on a spring and a prayer…

Like a spring being coiled, Samantha and Jon are inexorably drawn together. Sam begins to realize honor wears many faces, and she becomes the light at the end of Jon’s journey to redemption. The only monkey wrench is Victor, a rival gambler who will stop at nothing to make sure Jon misses the tournament. Even destroy Jon and Sam’s lives.

Fire up your boilers for STEAMPUNK II: Steampunk Reloaded, an illustrated anthology of steampunk stories, nonfiction, and art edited by Ann & Jeff VanderMeer. Coming October 2010 from Tachyon. (Via SF Signal). While not steampunk romance, this and the first anthology, STEAMPUNK, is a great way to dip your toes into steampunk if you’re interested in learning more about the subgenre.

Now I turn the mike over to you. Share your own SFR news in the comments!