Yes, it’s that time again! Time to scour the virtual Victorian globe in search of steampunk romance sightings. I am still in awe of being in a position to not only witness the birth of a new subgenre, but also track its course. What is the current position of steampunk romance, you ask? Don your brass goggles and take a look:

Katie MacAlister’s STEAMED and Nathalie Gray’s FULL STEAM AHEAD are now available. Alongside Dru Pagliassotti’s CLOCKWORK HEART, I do believe we are witnessing the first official wave of steampunk romances. (Have I read them all? Yes!) Lucky for us, more are on the way: 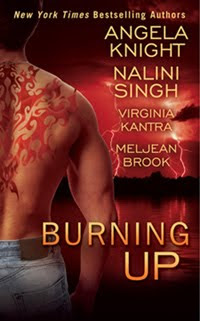 In August 2010, you'll be able to read Meljean Brook's "Here There Be Monsters," her first story in the Iron Seas series. It's part of the BURNING UP anthology. Click here to read the excerpt.

Speaking of Meljean Brook, have you seen the cover for THE IRON DUKE? Well, maybe not, but you can get a sense of it at the author’s site here. Have I seen it? Well, that’s for me to know and for you to find out, muwahahaha! But even based on the teaser at the author’s site, you can tell the art department is giving the steampunk elements a lot of brassy love. 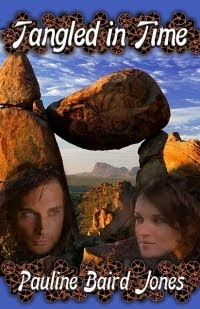 Colonel Carey (from The Key and Girl Gone Nova) takes a test "flight" through the Garradian time-space portal, but an unexpected impact lands him somewhere and some when. As he attempts to get to Area 51, he crosses paths with Miss Olivia Carstairs, who could be Mary Poppins' twin sister. Or maybe her cousin. Olivia's got a transmogrification machine powered by steam and something more, and a mouth he'd like to kiss like it was his job. Can he get them both to safety before the buzzard eats them or she shoots him with her derringer?

Thanks to the author, I’m reading it right now! But fear not—you can glom the excerpt here.

Remember when I blogged about the allure of the western steampunk romance? Sheryl Nantus will deliver with her forthcoming ebook, WILD CARDS AND IRON HORSES (August, 2010, Samhain Publishing).

During the recent Civil War, a soldier risked his life to save
Jonathan Handleston—and lost. With the help of an advanced
metal brace on his crippled hand, Jon now travels from one poker
tournament to the next, determined to earn enough money to
repay the man’s debt.

Prosperity Ridge is supposed to be the last stop on his quest, but
his brace is broken and he needs an engineer to repair the
delicate mechanisms. The only one available is Samantha
Weatherly, a beautiful anomaly in a world ruled by men.

Sam is no fool. Jon is no different from any other gambler—except
for his amazing prosthetic. Despite a demanding project to win a
critical contract to develop an iron horse, she succumbs to the
lure of working on the delicate mechanisms. And working with the
handsome Englishman.

Like a spring being coiled, Samantha and Jon are inexorably
drawn together. Sam begins to realize honor wears many faces,
and she becomes the light at the end of Jon’s journey to
redemption. The only monkey wrench is Victor, a rival gambler
who will stop at nothing to make sure Jon misses the tournament.
Even destroy Jon and Sam’s lives. 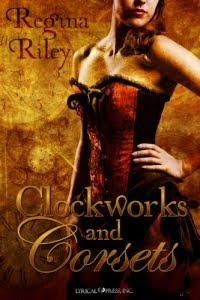 Clockwork, steam and secrets power a passionate adventure in the skies.
Everybody's looking for something.

Captain Rose Madigan of the airship The Merry Widow is looking for a paying job for her all-female crew. Gabriella Upstairs, her newest recruit, is looking for a reason to be glad she's on board. And Madam Ruby of the Red House Bordello is looking for the secret laboratory of a missing mad scientist--and is willing to hire the airship. When they find the lab and its single occupant, Atom Loquacious, danger and passion start steaming up.

Everybody's got a secret.

Captain Rose is secretly too ethical to complete this job. Gabriella's secretly attracted to Atom. Madam Ruby's secretly hungry for power. And the secret Atom is hiding might just threaten the lives of everyone on board.

Read an excerpt of CLOCKWORKS AND CORSETS here.

The Book Smugglers has another Steampunk Appreciation Week currently underway. Check out all the extensive book reviews and genre coverage because It. Is. Amazing. This Saturday, I’ll be blogging there about, um…what is it called again? Oh yeah, steampunk romance! Meljean Brook (THE IRON DUKE) will also be guest blogging.

Steampunk romance is garnering even more lovely coverage courtesy of Germany's Loveletter magazine. The six-page spread this month includes not only my in-depth column on the subgenre, but also interviews with authors Meljean Brook, Dru Pagliassotti, and Nathalie Gray. My gosh, is there anywhere in the world readers aren’t talking about it?! 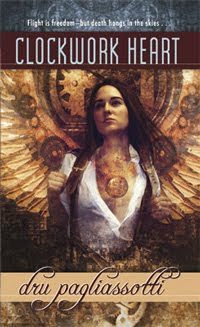 Where to submit your steampunk romance

Also, there’s still time (barely) to polish up your steampunk romance novella and submit it to Samhain Publishing for its forthcoming steampunk romance anthology. Submissions are open until April 30, 2010, and a final decision will be made by May 31, 2010.