My dear passengers, feast your eyes on this most excellent cover for DARKSCAPE: FIRST HEIR, the third book in R. Garland Gray's Darkscape series. I’m thrilled to be on the receiving end of another science fiction romance cover exclusive. Many thanks to the author and her team at Medallion Press for this advanced peek. 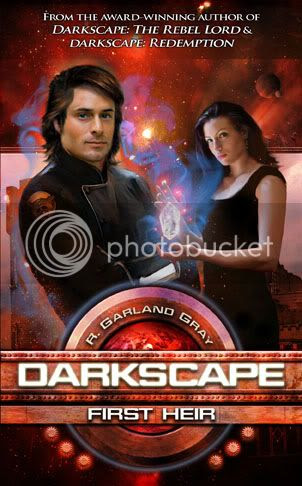 And my, what a cover! This cover excites me for several reasons. First, I think Medallion Press has done a great job branding the author and this series. Second, when I saw the composition of the couple, I felt that it clearly conveyed the romance aspect of the story. Third, the starry background communicates the science fictional aspects without being overtly SF, while the crystal held by the heroine tops it all off with a bit of mystery. Fourth, the deep, rich red coloring promises readers that they will find passion in the story. Fifth, the cover models look great—not just because of their beauty, but because their facial expressions come across as genuine. ‘Course, it sure helps that the hero is smokin’ hot in that uniform!

The image for FIRST HEIR is very close to an ideal science fiction romance cover, at least for me. While there have been some lovely covers in the subgenre, few have a quintessential science fiction romance “feel”—at least in terms of both reader and marketing needs. The best known exception, of course, has been the redesigned covers for Linnea Sinclair’s books, which feature couples against various galactic landscapes. If more covers looked like those or this one for FIRST HEIR, I think current and new readers alike would be able to easily identify the books as SFR.

My only quibble is that I would have liked to see the heroine on an equal par, visually, with the hero. But given she’s holding a crystal, I can see how that might have been difficult to achieve.

I know I’ve been blogging about covers quite a bit recently, but with good reason. It’s probably the most crucial marketing tool in a book's arsenal. I believe the cover for DARKSCAPE: FIRST HEIR is a definitive step in the right direction. And next week, I’ll be unveiling yet another cover exclusive that tells me SFR and covers are at the start of a beautiful friendship….

Cover Revealed For Enemy Within

Scruffy Lookin’ Nerf-Herders (via Kimber An at SFR Brigade)

And last but not least, I'm covering the topic of SFR covers in my next LoveLetter column, "The Cover Conundrum" (May).

So...tell me what you think about the cover for DARKSCAPE: FIRST HEIR.