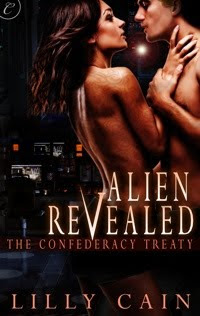 The first is ALIEN REVEALED by Lilly Cain. Here is the premise, courtesy of the author's Web site:

Inarrii agent Alinna Gaerrii was tasked with observing the Starforce base on Earth. Crash landing her observation pod onto the human base was not part of her mission briefing. Neither was making m’ittar – mind contact – with Major David Brown, the human who discovered her amongst the wreckage.

David thinks she’s a human psychologist sent to evaluate his Special Forces team – but she soon invades his dreams. Through their intimate mental connection she allows him to express his forbidden physical desires.

Alinna delights in the sensory exploration and submits to David in mind and body. She grows excited by the prospect of a treaty with the humans and a potential life mate in David. But an attack from an unknown ship sends the base into chaos, and Alinna may be forced to reveal her lie: erasing all hope of a successful treaty, and driving David away forever… 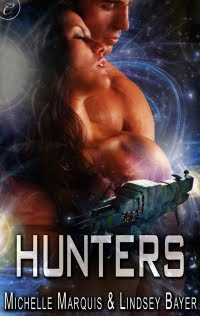 The second is HUNTERS by Michelle Marquis and Lindsey Bayer. (Unfortunately, I forgot to ask anyone at Carina for a copy of the cover in time for this post, so all I have is a small image I grabbed from the author's site.)

Nothing haunts you like the one that got away.

Harmony Knox is one of the smartest and most successful bounty hunters in the galaxy. From the crowded cities of Pyrus Four to the jungles of AEssyria no one can match her record for excellence and success. That was until an alien brain-eater named Prime became her only failure and escaped her, landing her in an AEssyrian jail for a year.

Now Harmony is free and things between her and Prime are personal. Vowing to capture him once and for all, Harmony will stop at nothing to catch this skip and put an end to his criminal career forever.

Barracuda Tanner is a haunted, ruthless man who became a bounty hunter when all other professions failed him. Emotionally scarred by his two year enslavement as a Kirillian cage fighter, he is searching for that one person who could mend his troubled heart. When he teams up with Harmony to catch the hydrocore Prime, he finally finds the one thing he’d been missing all his life; love.

And again, here is the cover for KS Augustin's IN ENEMY HANDS: 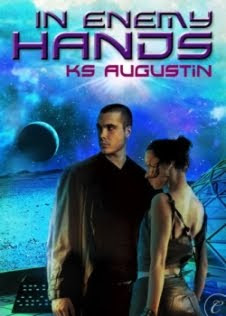 Also, Carina is hosting daily giveaways as well as a grand prize one ("the entire collection of 38 digital launch titles") until the official launch day, which is June 7, 2010.

Edited to add: Courtesy of Ms. Augustin, here are the dates you can enter for a chance to win the SFR titles:

So that's three SFR titles out of 38 launch titles total. Not a bad day for science fiction romance, eh?