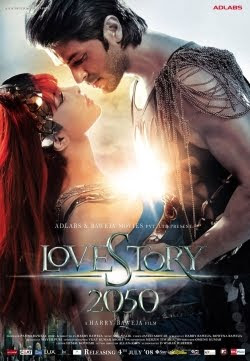 LOVE STORY 2050 is one of the most melodramatic and cringe-inducing science fiction romance movies I’ve ever seen, but it’s also the most heartfelt and well intentioned. This extravagant celluloid affair is a study in contrasts: How to make an SFR film that’s right and wrong all at the same time.

What do I mean by that? Read on to discover how I came to such a conclusion about Bollywood’s first blockbuster science fiction film.

Laurie Green of Spacefreighters Lounge first blogged about LOVE STORY 2050 back in July of 2008. In the Reuters article about the film, it’s noted that

A new Bollywood romance based on the premise of time travel is being seen as the Indian film industry's first serious attempt at science fiction… "We have spent close to 12 million dollars on the film and I would say that this is India's first real sci-fi film," the film's director Harry Baweja told Reuters.”

I was super excited to learn about this film. I’m a big fan of Bollywood, and of course then there was the science fiction romance connection. Then I forgot about it, thinking I’d seek it out after it was released on DVD. Er, then I continued to keep forgetting about it.

Flash forward to the present day: After finishing some blog work one night, I went hunting on Hulu.com for something to watch. I wanted something fun and frivolous, and I wasn’t necessarily seeking out anything in a science fiction romance vein. Well, so much for that, because what I found was LOVE STORY 2050.

So, I watched it.

And now my life will never be the same.

Oh my Hare Krishna. Where do I start? With the time machine? Mumbai 2050 that looks more like Mumbai 3000? The Mortal Kombat/Street Fighter sequence between the hero and heroine? The do-nothing villain who makes an appearance at the 11th hour? The fingernails-on-chalkboard scenes featuring a pink robot teddy bear named “Boo”?

Hm, while those would be fun, let’s begin with the basic set up:

In part, the hilarity stems from the fact that the film borrows substantially—and by substantially I mean way beyond any kind of loving homage—from multiple well-known science fiction films. Here are a few whose elements LOVE STORY 2050 most obviously pilfered:

THE TIME MACHINE
A.I.
I, ROBOT
THE FIFTH ELEMENT
BACK TO THE FUTURE
BICENTENNIAL MAN
THE MATRIX

Check out the trailer (it was the best I could find) and see if you can spot a few yourself:

Incidentally, compared to the film, the trailer actually makes LOVE STORY 2050 look pretty good. The movie itself? Words can’t even begin to describe it. I’m still processing the experience as I write this post. There were times I was engaged, times I scoffed, times I winced, and times I was totally weirded out. More than once, I asked myself, “Did they just go there?”

Here’s the thing, though: I love what this movie tried to be. I loved the soundtrack, the time machine plot device, and the supporting characters (Uncle Ya stole every scene he was in). There was plenty of action and humor, and of course, you can’t have a Bollywood film without the song-and-dance sequences (admittedly, some were better than others). And that poster—it’s an SFR lover’s dream. The epic-sounding title is great—even the font for it is a perfect fit.

This film had a definite, undeniable energy. Despite the flaws, I couldn’t look away. Above all, the film hinted at what might have been. LOVE STORY 2050 could have been a truly groundbreaking science fiction romance film. But alas, it was not to be. After months of anticipation in India, it tanked across the board. No wonder I forgot about it, because the buzz factor was zero.

Yet it’s the piquant Bollywood flavor that told me the film *got* the romance thing. The film is unapologetic in delivering a traditional romance front and center. Watching it, you’d almost wonder if the team behind Harlequin Presents had its fingers in the mix at one point or another. And because of its lengthy length, the film devoted an equal amount of time to the futuristic scenes. Unfortunately, they were very derivative and very campy elements, even if the special effects looked pretty nice (Weta Workshop was involved, if you can believe that!). 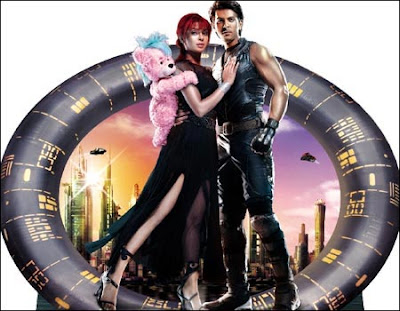 However, I could have forgiven the sketchy skiffy elements, barely there plot, and treacly romance if only the filmmakers had added more substance to the characters. Sana and Karan fall in love mainly because they are destined to do so. I never got the sense of who they really were or why they were right for each other.

Actually, I could even have forgiven that aspect if Harmen Baweja’s performance didn’t suck so many rotten eggs. You can tell he gives it his all, but the poor guy just can’t act. It didn’t help that LOVE STORY 2050 was his debut film—and that he was director Harry Baweja’s son. Yeah, I’m sure he was The Best actor for the part. Ugh, what a recipe for disaster. As a result of Baweja’s paper-thin persona, there was no chemistry between the leads, and the film ended up telling me the love story instead of showing it.

Still, I urge you to at least give this film a try. I found it to be a very exotic SFR film experience (speaking as a Westerner), and I can’t wait for the day when someone, somewhere, gives a film like LOVE STORY 2050 the love it deserves.