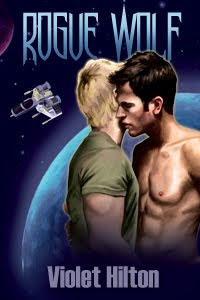 Captain Trent Rolston knows his space pirate crew isn’t the biggest or the best, but that doesn’t keep him from diligently finding new targets to pillage. He also has a more personal mission: to discover what’s been haunting his mechanic, Vince, and convince him they could be more than friends.

But Vince is harboring deep secrets. He’s living his life on the run as a human, hiding his alien heritage, hunted by his own tribe for daring to love an enemy. Despite his fidelity to his deceased partner, Vince realizes he's still affected by the mating cycle, and the drive to claim Trent is too powerful to avoid for long… and Trent isn’t helping, despite the danger as Vince’s tribe tracks him down and marks the lovers for death.

Mmmm…pace pirates…droool. Click here to read an excerpt. To learn more about Violet Hilton as well as sample a few free SF/F shorts, visit her blog (the steampunk one is particularly nice, though be warned, it has a bittersweet ending).

Dreams & Speculations is gearing up for its 2011 book club. Next year’s theme will be “Science Fiction By Female Authors.” How cool is that? (Thanks to Rebecca of Dirty Sexy Books for the link.)

A number of the titles qualify as science fiction romance, and book nominations are welcome according to the post:

To nominate a title and/or author, just leave a comment with the following information:

Author Name:
Title of Suggested Book:
A Short Summary of that Book:

While I could easily have flooded the comment section with recommendations, I managed to restrain myself. Here are the books I nominated:

If you have a chance, please head on over and make a few suggestions!

As part of her “Summer of SFR” series, Verona St. James has posted a review of J.D. Robb’s NAKED IN DEATH. She describes one particular element that really struck a chord with her:

One aspect of the book that really shone for me was the near future world-building. It was excellent, subtle, with some clever touches like the handgun ban and the value of real coffee. I also thought the logistics of widespread legalized prostitution were well-thought out and convincing. I also liked how the concept of space stations and space travel was so subtly alluded to, it was as commonplace as the coffee.

For all of you writers out there:

Carina Press editor Michael Banks muses about Which is More Important—the Synopsis or the Manuscript?

And at the SFR Brigade, Gini Koch (TOUCHED BY AN ALIEN) is currently Walking the Line in SFR: World Building Vs. Info Dumping:

I personally think it’s a lot easier to get the romance side to come over to SF, than the SF side to go to romance. Books shelving in the SF/F section will have a better chance of garnering both SF and romance readers -- the SF ones because the book is on “their” shelves, the romance ones most likely from buzz, be it word of mouth, reviews, or social networking.

Our science fiction romance “must-read” list is at 100 titles. This is your last chance to suggest titles before I lock the list for the time being. Overall, though, I think we have a great variety of books. I’ll work on adding up to three tags per book prior to announcing the final list (and any assistance is most welcome).

Finally, I have a post up at Tor.com that recaps the recent conversations about stories blending SF and romance: Romance And Science Fiction, Sittin’ In A Tree… What can I say? Science fiction romance is a topic that will never get old.