Steampunk Scholar On FULL STEAM AHEAD 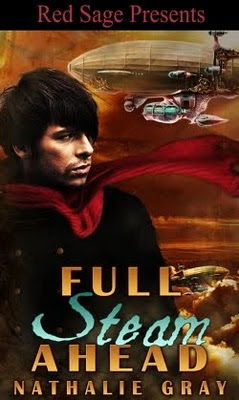 So check this out: A man by the name of Mike Perschon, who runs a blog called Steampunk Scholar, and who is also a doctoral student at the University of Alberta, and who is also an English literature professor at Grant MacEwan University, is writing a dissertation on "Steampunk as aesthetic":

The purpose of this blog will be to create an online annotated bibliography of sorts for my research…My posts will consist of annotations concerning weblinks and peer-reviewed scholarship salient to my dissertation, which is Steampunk as aesthetic.

He had many scholarly things to say about her book and related topics. In the quote below, he questions the haughty reactions of elitist steampunk fans to the merging of steampunk with romance and erotica:

I was nonplussed to hear folks at The Nova Albion Steampunk Exhibition getting down on Katie MacAlister's Steamed, not because I think it's a great work of art, but because they largely hadn't read it. They were mad because of the appropriation of various web images for the book's trailer, which ostensibly conflated their inflated view of steampunk with the book itself, seen by many steampunks as opportunistic dreck. This as the same sort of snobbery that applauds when a laptop is steampunked, but laments when the same thing is done to Mickey Mouse. Before casting stones at writers like MacAlister and Gray, steampunk fans, aficionados, adherents, and acolytes need to ponder why steampunk is popping up with regularity in romance and erotica. Why is the steampunk aesthetic seemingly suited to sexy storylines? Is it just because of the association with corsets, or is there something more to consider?

Mr. Perschon goes on to describe FULL STEAM AHEAD and Katie MacAlister’s STEAMED as “crosshatch fantasies,” meaning that “there is a transition from one narrative universe into another.” Furthermore, he explains its role in the narrative:

Taking her reader into a steampunk world via a crosshatch device enables Gray to introduce them gently to it - repetition of reading within the same genre builds up a repository of shorthand for the experienced reader. Longtime SF fans don't need explanations of the laws of robotics, or the issues surrounding time travel, or the complexities of contact with alien species, but neophytes do. In that respect, Gray's approach might be far more successful for readers unfamiliar with SF and Fantasy tropes.

Given that steampunk romance is a new subgenre for many romance readers, I thought his observation echoed our own past conversations about how best to introduce said readers to the subgenre. Authors are using devices such as “crosshatch fantasies” to ease the learning curve for new readers. Amazing!

Regarding the action scenes in FULL STEAM AHEAD, he observed that

The battle scenes are a mix of Star Trek and Master and Commander, which make them fast paced and fun, though sometimes glaringly familiar to a longtime geek like myself. Gray makes a nod to the two classes of The Time Machine in her opposition of humans and their albino-Viking enemies, the Varangians….

And he concludes with a lovely validation for FULL STEAM AHEAD:

While it won't be heralded as either literary writing or a classic of steampunk, Full Steam Ahead deserves to be included in the library of steampunk fans who enjoy a swashbuckling crosshatch adventure and a steamy romance. While I'm unlikely to be the first person to make this joke, I will nonetheless: maybe these romances are a sub-sub-genre of steampunk...called steamypunk.

Mr. Perschon also made some interesting…comparisons between FULL STEAM AHEAD and STEAMED. Whose brass goggles reign supreme in his opinion? Well, you’ll have to go read his post to find out!

In conclusion, I’d like to thank Mike Perschon for incorporating steampunk romance into his research—and also the authors who are taking the plunge into such new, fantastical territory.