First off, let me mention that the byline here is inaccurate. Gini, or ‘The Creator’ as she insists we call her, is off at Comic-Con, having a wild time, running her yap about us, her characters, and how she came up with us and all that blah, blah, blah jazz.

So she didn’t have time to actually DO an article and instead told me to handle it. Always the way. Who am I, you ask? Katherine “Kitty” Katt (I’ll wait while you snicker), heroine of her Alien Series.

Since my exact instructions were, “Talk about diversity and be entertaining, I can’t give you more ‘cause I just got invited to a party for Charlaine Harris and I have to figure out what I’m wearing,” I feel that I have wide range to pretty much do whatever I want. (Oh, and Gini, wear an Aerosmith t-shirt -- you can’t go wrong with my boys on your chest.)

All that out of the way, since we’re being our own virtual conference, I figured the best way to discuss diversity in science fiction romance was to chat it up with a panel made up of my diverse gang from TOUCHED BY AN ALIEN* over here.

So, let me introduce this session’s panelists! We have Jeff Martini, super-empath from Alpha-Centauri and my personal favorite alien; James Reader, human agent working with Centaurion Division, former top international male model, and coolest guy in any room; Richard White, Supreme Pontifex for the A-Cs on Earth and master of the sly dig; Lorraine, Dazzler on Duty and all around fun A-C girl; and Mephistopheles, Supreme Fugly, Deceased.

Martini: Hi.
Reader: Nice intro, girlfriend.
Lorraine: You really call us Dazzlers? That’s kind of flattering.
White: Miss Katt, after those, ah, enlightening and hyperbolic introductions I, truly, cannot wait for your questions.
Mephistopheles: Where’s my drink? I was promised a drink!

Kitty: Mephs, really, chill your hooves, dude. Someone get old devil-face a sulfur margarita or one of Agent Z’s gargleblasters and shut him up. Okay, I polled our readers and here are the questions they wanted answered. Well, the ones on topic and fit to print.

So, Question One is really for Lorraine. A-C women are exceptionally brilliant, particularly when it comes to math, sciences, medicines and doctoring, and so on, and you and your bestie Claudia are no exceptions. But I find your taste in men to be a little…different from mine. So, to clarify, who is the ultimate Dazzler Dude and why?

Lorraine: Oh, that’s easy. Stephen Hawking. There is no one more amazing. I know Claudia and all the other girls feel the same. Bill Gates is pretty awesome, too. And all those physicists and rocket scientists. I wish Albert Einstein were still alive, too. I could go on.

Kitty: Dazzlers are totally into brains, I get it. But, really, I look at your men, and they’re all total hotness and none of them seem stupid. So, what gives?

Lorraine: They’re all fine, but human brains have such capacity for math and science and more…

Kitty: Wipe the drool off your chin, girl. Nerds of Earth, rejoice -- the hottest girls around want you and only you. So, James, what’s it like being a human agent working with aliens?

Reader: What I like best is that the A-Cs are so accepting. Of most things, anyway. They have no hang-ups with homosexuality, race or skin color issues. At least our A-Cs don’t.

Mephistopheles: All who are not in my image should perish!

Kitty: Geez, Mephs. Your attitude’s as bad as your breath. There’s more than one reason I call you fugly, you know, but really, none of us want to duplicate your image, ever. It’s not a good look for anyone, yourself included.

White: This is true. We care about a person’s mental and moral makeup, not who they love or what their skin color is.

Kitty: True enough. The Head of Recruitment is Paul Gower, who happens to be Reader’s boyfriend, has ebony skin, and who is, I have to mention, totally hot.

Kitty: I lust after you more.

Martini: This is true, thank God. Speaking of which, I have to mention that where we’re not as tolerant is in terms of religion. My people were exiled to Earth because of our differing religious beliefs, and we have laws against inter-religious or inter-species mating.

Kitty: Yeah, but I’m working on that. Right, Mister White?

White: Yes, you are, Miss Katt. Every day. Every single day. And no, I don’t find it tiresome at all. 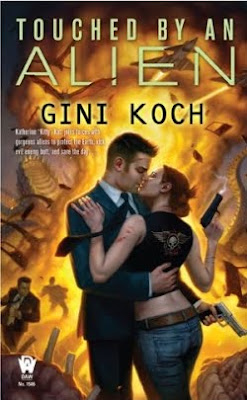 Kitty: Good to know. So, what do all of you think of Earth prejudices?

Martini: Speaking for and as an empath, if I could get people to stop hating on each other because of their minor differences, I wouldn’t need to go into regenerative isolation on such a regular basis.

Lorraine: I’m perfectly fine with your Earth women not being clued into the fact that brilliant geeks and nerds are beyond amazing both in and out of bed. More for me and my Dazzler sisters to choose from that way.

White: I find some of the prejudices very similar to ours, some not. Because of our natural talents --

Kitty: You mean empaths, imageers, troubadours and the like?

White: Yes, and I appreciate the interruption.

White: I’m sure. Anyway, our natural talents give many of us, like Jeffrey, advantages that seem almost like superpowers. But on our home planet, they aren’t any more exceptional than someone on Earth being a better singer or faster runner than others. It’s all in the individual perspective.

Mephistopheles: One of the things I liked best about Earth was human capacity for rage. It’s so easy to get humans upset with each other over nothing, makes a good breeding ground for my displaced people.

Kitty: Yeah, good point. Time for only one more question. What’s the most important aspect about you that you’re happy The Creator didn’t try to change?

Reader: My sexual orientation. I told her I was gay and she said, “works for me and I love who you’re involved with, too.”

Martini: That I didn’t have to be a jerk or a different person in order to land the girl I’m in love with.

Kitty: Awww, you’re so sweet. I know some people are saying you’re a Beta Hero but you’ll always be an Alpha Hero to me. Mister White?

White: That I’m our religious leader, like my father was, but that I’m truly his opposite, not his imitation.

Kitty: And we all say, ‘thank God’ for that one. Last, but not least, Mephs, what about you?

Mephistopheles: Even though it was my undoing, I’m glad she left in my confusion over you.

Kitty: Excuse me? You tried to stomp me, more than once. Where was your confusion? Which giant hoof to use?

Mephistopheles: Your actions and thoughts are confusing to me. However, I still say you and I would have made an unstoppable team.

Kitty: Probably so, but I still say I’m glad it didn’t happen. And, in case you were wondering, I have my extra-hold hairspray right here, so don’t get any ideas.

Okay folks, we’re out of time, but I hope you enjoyed our panel. The Creator said she might drop by if she has connectivity or isn’t hobbing with nobs but I think Heather and Agent Z are also willing to help answer any questions. Enjoy the rest of the Parallel Universe ‘speakers’, we know they’ll be awesome! 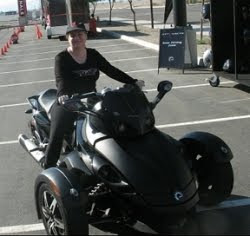 Gini Koch lives in the American Southwest, works her butt off (sadly, not literally) by day, and writes by night with the rest of the beautiful people. The first book in her Alien series, “Touched by an Alien”, released April 6, 2010 from DAW Books, receiving a starred review from Booklist as well as other excellent reviews. “Touched by an Alien” has also been named by Booklist as one of the Top 10 adult SF/F novels of 2010. “Alien Tango” releases December 7, 2010, and “Alien in the Family” releases April 5, 2011, with “Alien Proliferation” following later in 2011. You can reach Gini at her website, http://www.ginikoch.com, or via email, gini@ginikoch.com.

*TOUCHED BY AN ALIEN characters are the copyrighted property of Gini Koch and DAW/Penguin.