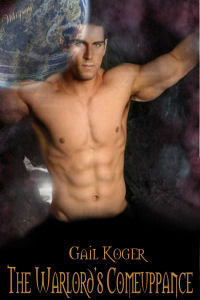 I have news of a release and a sale for you this fine day:

Here’s the set up:

Stealing from a warlord and giving him the one finger salute as I made my getaway was not the brightest thing I’d ever done. Okay, it was an incredibly stupid stunt.

Did I mention that this particular Coletti warlord is the most feared in the entire galaxy? That Zarek’s the ultimate predator and even the other warlords are scared spitless of him? That he never ever stops until he either captures or kills his prey? Yeah, I have the big, bad after me and all because of one little finger. Okay and a Ditrim crystal the size of my fist. Am I worried? Of course, only an idiot doesn’t fear a very angry Coletti warlord. But, I am very good at what I do. Bad news is, so is Zarek.

If you like sizzling, humorous SFR, then you might be interested in checking out these character-driven stories. Click here to read an excerpt from THE WARLORD’S COMEUPPANCE. (Thanks to Galaxy Express passenger Beth for the information.)

Here’s the “unofficial/unedited blurb” from the author’s site:

Who better to take down the Giant than Jaq and her magic beans?

When the MOTHER organization wants their best operative to go on a new mission, Jacqueline Robinson wants nothing to do with it. She has a higher target in mind. With the latest biotech in hand, Jaq now has the means to reach the floating islands above the city and finally bring down Giant Corp. The corporation not only caused her sister to become deathly ill, but it also stole away the one man she's ever loved. She'll do anything to bring down the Giant.

After leaving his life behind to go in deep cover, Harper English has the goods on the illegal cashflow of Giant Corp and its owners, the Ochres. Now he awaits extraction and wants nothing more than a new life of peace and quiet. When Jaq, a decidedly un-peaceful handful, climbs back into his world, all hell breaks loose. On the run from the murderous Ochres, Jaq and Harp need a way off the floating island without breaking their necks.

Neither want to fall, not from the sky, or for each other.

This sale is in addition to her previous one, SILVER BOUND (also to Carina, and formerly titled “Caught In Silver”). An official release date has yet to be determined, but the author’s site says they’re “coming soon.”