Erica Anderson's THE ANTAREN AFFAIR: More Than Meets The Sexxoring 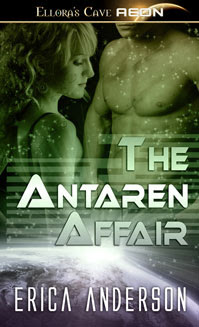 Sex and politics go hand in hand, and Erica Anderson’s THE ANTAREN AFFAIR reminded me how much science fiction romance readily lends itself to exploring such themes.

The story begins with Colonel Rákōsy Avar of the Imperial Forces who is headed to the planet Antaren for a series of diplomatic talks in order to negotiate an alliance. Heroine Meraya is a kebara, “a woman trained to provide sexual pleasure.” The Antaren leaders offer her to Avar during his stay as a show of their good faith.

However, beneath the titillating veneer is a story with a definite political theme, one played out against an intergalactic chessboard. In fact, one couldn’t really tell this story effectively without employing erotic elements. Think about the premise a bit further: a woman who is a potential source of Antaren political secrets (because she provides sexual pleasures to the male leaders, and you know how the tongues of male politicians wag in the privacy of their bedrooms) is expected to have intimate experiences with an Imperial diplomat. The Antaren leaders expect Meraya’s complete loyalty, but should they make such a blithe assumption?

[Slight spoilers ahead, but not enough to ruin the plot]

To Meraya, Avar represents a type of man worth serving sexually because he recognizes her worth as a free woman and views her as an equal. For example, he explains to her that:

“In the empire—the place that I come from—there is the idea that hitan is shared. That it must give pleasure to both. We have a ritual called a pair-bond. It is like a promise between two people to share service and pleasure.”

Therefore, Meraya’s story is a bit of a coming-of-age tale since once Avar enters her life, she begins to question the methods of her upbringing as well as the Antaren political hierarchy.

Meraya’s position as a kebara actually has roots in a political role. The story makes a reference to The Life of Tanat, which is about Tanat, the first kebara. Tanat “understood service as an unbreakable bond that required as much of the master as the kebara. Once, long ago, the kebareet had pledged themselves, had entered service willingly.”

I would have liked to know more about how the relationship devolved because it's such a tragedy. The idea of women wielding major political power through their control over the Antaren men's sexual pleasure is intriguing. How did they lose all of that power? The story only states that “somehow, the old ways had been lost.” But that absence of information made me realize that I’d like to read about such detail in stories like THE ANTAREN AFFAIR. While the erotic scenes were plentiful and fun, there was potential here for a longer story that edged a bit more into the political sphere.

I did have some difficulty suspending my disbelief that the Antarens “controlled a very strategic portion of interstellar space that the empire coveted”, yet also managed to exercise strict control over its female population. In fact, intelligence reports “had no data on female Antarens.” I suppose it’s within the realm of possibility, but I couldn’t help my assumption that a space faring race would have some basic level of gender equality. But ultimately, I feel that was a minor distraction in an SFR story that had intriguing themes and purpose beyond the sexual journeys of the hero and heroine.