Are Romance Heroines Forbidden to Kill the Villain? 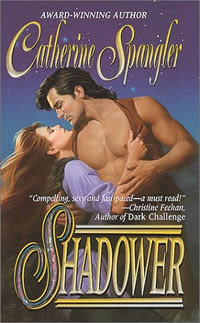 File this one under: Are you kidding me?

First, the set up: I recently finished Catherine Spangler’s SHADOWER. Before I begin my mini rant, I want to say that overall I enjoyed the story and had fun with its lighthearted space opera adventures. While certain elements left me raising my eyebrows, they weren’t enough to deter my enjoyment of the story. I’m definitely going to seek out SHIELDER and Ms. Spangler’s other science fiction romances.

That said, I read a passage in SHADOWER that blew my mind. I am going to quote it here, but it shouldn’t spoil anything since I’m not going to reveal what happened *after* this scene. However, let this serve as a minor spoiler alert in case you haven’t read the book.

SHADOWER has a villain, Galen, although he is a secondary character and not as significant a threat as the other collective-type villain, the “Controllers.” In the scene, the heroine, Moriah, is in a face-off with Galen. Cool space western goodness, right? My anticipation is spiking because the heroine’s got a phaser in her hand and I’ll get to see her kick some serious ass. I’ve even forgotten how two-dimensional Galen is because this moment is just too exciting for words.

Galen aimed his rifle, but before she could raise her phaser and save herself, another blast knocked the rifle from his hands. With a snarl, Galen reached for the disruptor on his belt.

Moriah took cover, hurling herself into the edge of the woods and behind a tree. While she wanted to kill Galen, she didn’t know who was shooting at them. Safely out of the open, she readied her phaser.

Okaaaaaaaaaaaaaayyyy. Let’s review. After Galen’s rifle is knocked from his hand, he reaches for his disruptor. Therefore, he’s distracted. I mean, what an opening! But Moriah, despite having been depicted as a woman who is perfectly capable of defending herself, turns her back and runs for cover instead of taking advantage of Galen’s distraction and blasting his nasty evil arse all the way to the end of the universe.

Hmm…I guess Moriah forgot to attend the Han Solo School of Shoot ‘Em Up First, Ask Questions Later. Incoming fire notwithstanding, Moriah had a clear shot and she didn’t take it. I guarantee you, if the hero had been in her position, he would have shot Galen first before running for cover. Why, why, why was this glory denied to our poor Moriah?

Now, my beef isn’t directly tied to Catherine Spangler or even SHADOWER. This story is simply an example that highlighted more keenly one of my frustrations with romances in general. My frustration doubles when it’s an SFR kick ass heroine who isn’t allowed to kick ass in the same capacity as the hero. Note that the scene involved a face-off with guns, not fists. Technology leveled the playing field.

As I wrote this post, I tried to think of examples of science fiction romances where the heroine—on her own—defeated the villain (the main villain, not a minor character or one of the villain’s henchmen), regardless of means (e.g., gun, using space ship artillery, other weapons). Compared to, say, stories where the hero gets to kill the villain on his own (if they defeat the villain together, that’s a different story). For the life of me, I couldn’t think of any examples that immediately came to mind (key word being “immediately.” I will have to do some more research on the matter). Regardless, I think a moment like that would really stand out in my mind.

The above scene from SHADOWER made me wonder if the author made a deliberate attempt to steer the heroine away from having to end Galen’s life. And if so, why? To ensure the heroine remained a sympathetic character? In my mind, justice would have been served, so what does it matter who kills the villain? The hero wanted Galen dead, too, but it wasn’t as if the whole plot was structured around his thirst for vengeance. I sure was rooting for the heroine in this case.

On a related note, remember when Susan Grant shared with us that a scene in SUREBLOOD was changed to remove a reference to heroine Valeeya Blue striking a subordinate? Am I sensing a pattern here?

The idea of keeping SFR heroines “pure” as far as violence is concerned could be an issue more specific to mainstream print romances, because I’ve read SFR ebooks that push this boundary. But even so, this makes me wonder if some publishers and/or some authors think that in general, romance readers will rise up in arms (heh) if a heroine kills a villain in the name of justice. Maybe in the past that might have been true to an extent, but now? Can they safely assume readers haven’t changed at all since the romance market was born?

On the bright side, perhaps ebooks will allow more latitude for heroines in this regard, since the overall risk is less (financial risk, but also the risk of turning off readers).

Still, seems logical to me that if a heroine is of the kick ass variety, we should just let her do her job.