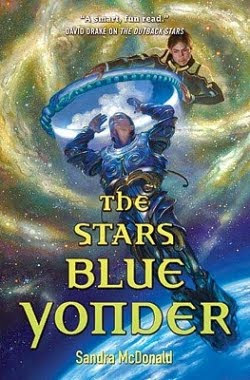 Sandra McDonald’s THE STARS BLUE YONDER (Tor) is now out in paperback. It’s the third book in her science fiction romance/military SF/science fantasy trilogy that began with THE OUTBACK STARS and continued with THE STARS DOWN UNDER. I really enjoyed this trilogy, especially so because of its hybrid nature. I could never predict where it was going. It will appeal to readers who like military sf, science fantasy, romance, and time travel. Also, say yes to this trilogy if you’re a fan of alien artifacts.

However, the only reason I even apply the word “trilogy” to this series is because of the current publishing distribution system of mainstream print books. These three books are really one big epic story. The first introduces the couple, the plot, and the setting, the second one is more of a “bridge” book, and the third ties all the plot threads together. The first book stands alone, but ultimately I felt that reading all three made for a much richer experience.

Not only does this trilogy focus on the adventures of the same couple throughout, but THE STARS BLUE YONDER is the most science fiction romance oriented of them all. It also has a riveting time travel element. You can read the story blurb at Amazon because I don’t want to risk spoilers in case anyone hasn’t read it yet but intends to. And yes, you do need to read the first two or you’ll be lost.

In addition to sharing the news of the paperback release, I also have a nifty trailer to show you courtesy of Sandra McDonald. I love this trailer not just because of the Space: 1999 references (Alan Carter, you’re money, baby), but also because there are lots of secret handshakes that you will only gleam if you’ve read the book.

Also, because THE STARS BLUE YONDER is heavily infused with Australian Aboriginal mythology, the trailer contains fun clips of Australian related movies and such. So without further ado, I’d like to present Sandra McDonald's “The Stars Blue Yonder – Ode to Australia”:

Read the author's announcement post (and watch the trailer again!) on her blog. To learn more about Sandra McDonald and her work, visit her site at www.sandramcdonald.com.