Interview With DAUGHTER OF THE MOON Author Patricia Green 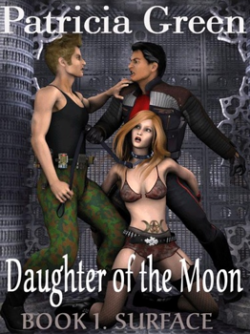 The Internet is a vast and wonderful place, but that quality also makes it easy to overlook sites where I might otherwise discover science fiction romance. The work of author Patricia Green is just such a case.

Anyhoo, I thought I’d host a meet and greet so we can get to know Patricia Green and her work. We collaborated on an interview for your reading pleasure:

The Galaxy Express: Inquiring minds want to know: Who is Patricia Green? What appealed to you about becoming an author, particularly one who writes science fiction romance?

Patricia Green: I’m just your average, everyday writer. I write 4-6 hours a day on a variety of fiction and non-fiction projects. I wrote poetry for pleasure for many years, but just after my daughters were born, I tried my hand writing prose just for amusement. Friends coaxed me to submit a story to a publisher. It was picked up by a very well-known erotica publisher, and they asked me to write several more to match and form a book. Thus, my writing career was born. I have been spoiled since then by having 7 books published (and an 8th to be released very soon).

I love both science fiction and romance, reading extensively in both genres. When I combined them, something clicked and I found my niche. Since then, I’ve had an avalanche of ideas.

TGE: In a few sentences, please describe the premise of your new science fiction romance, DAUGHTER OF THE MOON, BOOK 1: THE SURFACE.

PG: The Daughter of the Moon series is about a group of twenty-something men and women who live in a future society bludgeoned by war. Their answer is a return to the mini-skirted 1960s, with free love and open relationships unhindered by pregnancy and disease. Birth control is still a question in this future and trust of one’s partner in this area is a plot element (that trust will be an issue for couples for a long, long time, in my view—no matter which gender is responsible), but the method in the book is reliable and long-term.

About twenty of these friends form a cohesive group to build a shelter should the war around them turn nuclear. Their timeline and technology are what make the story science fiction; their interactions with each other focus the love story on two remarkable people: beautiful, flame-haired Sonata and brawny, cobalt-eyed Mikhail. The ending culminates in the realization of love, leading into the second book.

TGE: How would you categorize the story (e.g., space opera, post-apocalyptic)?

PG: “Opera” is a good word for the story, simply because it has tragedy and comedy along with romance, all set in a future world.

TGE: What inspired you to write the book?

PG: Oddly enough, when I was a teenager, I belonged to a group which formed a plan to build such a shelter. This was during the middle of the cold war, in the late 70s. The group was unfunded, and though the plans were detailed, the members were more of a social clique than anything else. I outlined the book as a teenager, but didn’t write it until 15 years later—only the kernel of the idea and some of the traits of the characters remain.

TGE: Where can readers find DAUGHTER OF THE MOON?

PG: Daughter of the Moon, Book 1: The Surface is available now at the publisher’s site as well as on Amazon.com. The easiest way to get it is to visit my web site at http://www.patriciagreenbooks.com, where there are links and an excerpt from the first chapter. It is an electronic book only, but comes in 10 formats, so it is accessible to everyone.

TGE: Do you have any other erotic/science fiction romances that might interest my blog readers? Do they all include a Happily Ever After?

PG: I am a dyed-in-the-wool Larry Niven fan. I got started with his wonderful books and short stories when I was a teenager, and came to love the high-tech universes he describes. Johanna Lindsey, a very successful romance author, also captures my heart with her historical romances and, probably most of all, with her rare sci-fi romances. I’m not much of a TV watcher anymore, but in years past I was quite a Trekkie and later went into paroxysms of joy over Babylon 5. As for films, the most recent Star Trek movie captivates me. I’ve seen it 5 times so far--and counting. 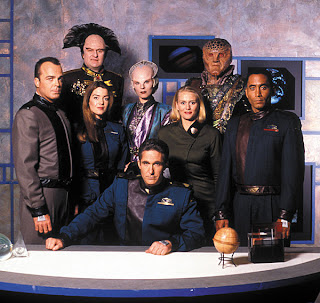 TGE: Do you have anything else in store for science fiction romance readers?

PG: Daughter of the Moon, Book 2: Articulus, will be released by the publisher shortly. It follows the progression of Sonata and Mikhail’s relationship which becomes considerably more complicated as they and their friends are forced into their high-tech underground shelter.

Also on the horizon is a prequel to Laricon’s Ways. It’s a publisher-requested novella detailing an escapade of the charming spy, Michael O’Malley. I am, simultaneously, in the beginning phase of a new sci-fi romance novel with unique properties I shouldn’t reveal—though I can say it’s an adventure through the stars. And just in the last week, I finished a short story that I hope will begin a new collection of shorts.

Thank you, Heather, for giving me this opportunity to introduce myself to your readers. I hope my scribblings lend your readers a smile and the pleasure of falling in love with a new hero or heroine in the magical, kaleidoscopic world of the imagination.

Ms. Green, thanks for your time, and for your art.

You might be interested to learn that Patricia Green has some free, non-SFR poetry available on her site. I can’t decide which piece I like better: “The Were-Pug” or “Why I Hate Comcast.” Now, if only she’d write some science fiction romance poems…