Is There A Market For Offbeat SFR? 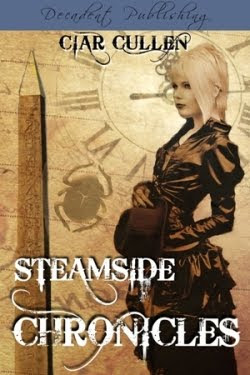 I’m all for reading science fiction romances that are quirky, weird, experimental, or offbeat. Not many strictly fall under this category (Joyce Ellen Armond’s free short “Burned and Burning” is one; Ann Aguirre’s free short “Still We Live” is another), but I know I’d definitely continue to seek them out. I can suspend my disbelief for many things, and I won’t dismiss a story or stop reading if at least one or two major elements (e.g., characterization, setting) hold my interest.

My only concern about such stories is plot. I’m a big plot gal, and if I’m going to read an experimental SFR I’d prefer it have a plot I can sink my teeth into. But sometimes the nature of an offbeat story is that the plot isn’t always the main point.

The other question is if these types of stories would actually sell. Talk about a niche lover’s niche!

What prompted these thoughts is STEAMSIDE CHRONICLES (Decadent Publishing) by Ciar Cullen. This novella is definitely an eclectic blend of genres. Thanks to my shiny new Kindle, I finally caught up with it. The story is a challenge to classify, but that’s one aspect I liked about it.

The story’s setting is pretty much straight Victorian. Despite the title, I actually found the steampunk elements to be sparse. There are so few (IMHO) that I actually would not include this in the steampunk genre (although I am only one reader—others may feel differently). My take? STEAMSIDE CHRONICLES is historical science fantasy time travel with paranormal and romantic elements. Whew!

The premise is intriguing: a strange force transports the heroine to New York in 1890, specifically a locale known as “Steamside.” The story focuses on her attempt to learn where she is, and why.

Without going into spoilers, there’s lots of quirkiness in this tale. The main characters speak in a Buffy-esque dialogue, which means lots of contemporary pop culture references. When not infiltrating Victorian society, they wear a mashup of goth & steampunk-inspired costumes.

There’s a romance with a well-defined arc, but I didn’t feel as though it was the driving force of the story. The secondary characters are colorful. There’s also some action-adventure toward the end in an exotic country. Oh, and I mustn't forget to mention the apparitions, strange visions, and occasional airship sighting. The only thing missing is the kitchen sink, har har.

While some of the elements in STEAMSIDE CHRONICLES didn’t work for me, they may well work for other readers. And vice versa. Regardless of whatever I found lacking, I applaud the author for taking the risks she did. I’d rather read something that takes risks and is flawed rather than a mediocre story.

While I’d give experimental SFR a try in a heartbeat, I also understand if few wish to write them. They might not be the most strategic way to grow the subgenre, but they’d definitely enhance it.

Do you have a taste for offbeat SFR? If so, what’s your criteria for a good story?