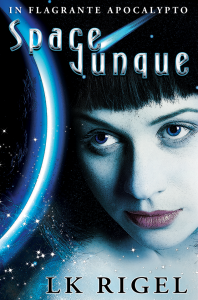 Much as I blog about seeking out science fiction romance in all kinds of places, I’ve never actually read a self-published book in the subgenre. (To qualify, I’m not counting authors who self-publish their back lists, or authors whose published work I’m familiar with.)

The main reason I’ve never sought any out is basically the risk that comes with self-published territory. I have plenty of published books to read, and I’d rather spend my time reading them instead of sifting through titles of potentially dubious quality (not to mention the financial cost of doing so). If a self-published book came recommended, that would be one thing, but at this point, given the general lack of gate keeping for self-published titles, the likelihood of finding something worth reading on my own seems minuscule.

Still, I’m not totally opposed to reading a self-published SFR. Which is why I felt intrigued when author LK Rigel sent me her SFR e-novella, SPACE JUNQUE.

I decided to give it a try. After all, the story was right here in front of me, presented for free. In fact, given the mysterious territory a self-published story represented, I started feeling rather giddy with anticipation. Would I find an undiscovered gem? A laugh riot camp-fest? Or cringe-inducing prose?

LK Rigel had sent me the story blurb. I skimmed it quickly and promptly put it out of my mind because I was determined to have no expectations going in (other than the fact that she described it as a science fiction romance).

I started the story and learned that she wrote well. Read some more and was intrigued by the worldbuilding. Read even further and liked the plot and characters. Then, what do you know—I reached the end!

The story as a whole entertained me. I liked the author’s voice and style. Part of the reason I kept reading is simply because I wanted to get the complete experience of reading a self-published SFR. It helped that LK Rigel could tell a story, but even if it had been horrible, I would have at least skimmed through to the end.

I felt the story could have used something more, however. Despite the fact that SPACE JUNQUE was edited by Anne Frasier, I felt as though the story's length shortchanged a number of elements—important elements, too, such as the romance, worldbuilding, and a few transition scenes. Your mileage, of course, may vary.

Without going into spoilers, the romance could have used more development. As it stands, SPACE JUNQUE falls into the romantic SF category. I also would have liked to see Char, the heroine, take a more proactive role in the story (she does, however, exhibit one behavior that I would like to see more of in SFR. Only click on the following link if you don’t mind a SPOILER: Here’s what I’m talkin’ about.)

Additionally, the story veers into a science fantasy/paranormal hybrid. Which is fine except that I felt those elements needed more foreshadowing and/or set up.

My overall conclusion from this experience is that SPACE JUNQUE told me that the author has potential. The quality is high enough that I actually enjoyed it more than a traditionally published SFR I’d just finished a few days prior. I didn't expect that to happen with a self-published story. Now that I think about it, I did hope that the story would be on a par with traditionally published titles. And it is, especially if I factor in all the books I enjoyed that I also consider flawed in some way. Basically, SPACE JUNQUE strikes me as one of those “exception to the rule” situations.

Despite the elements that didn’t work for me, I’ll keep an eye out for LK Rigel’s next book in the series, SPIDERWORK (Visit Indie Paranormal Book Reviews to read a sneak peek of SPIDERWORK as well as to enter a contest for a chance to win an e-copy).

If you're interested in checking out SPACE JUNQUE, the author has it for a special holiday price of just .99 cents at Amazon, Smashwords, and B&N.

So tell me—have you ever read a self-published science fiction romance? If not, what would it take for you to try one?