What the *@$#%!: Cursing in Science Fiction Romance 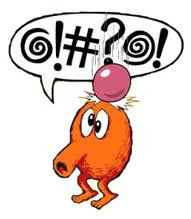 I love the idea of science fiction romance pushing boundaries, and it’d be fucking great if cursing could push the goddamn envelope once in a while. :) I mean real, good old fashioned honest-to-goodness cursing, too. No friks, fraks, frucking or whatever other euphemisms are out there (genuine attempts at worldbuilding aside as opposed to publisher standards imposed on authors).

You might be thinking something triggered this post, and you would be correct in that assumption. In an ebook I recently read from a digital publisher, the hero admonished a secondary character for cursing. Now, I understand why the hero did that. It was consistent with his character—a “good guy” hero—and the author used the “f” word in the story, so it’s not as though she was aversive to strong language. But it made me wonder if there's a common avoidance of swear words in the romance genre to the point of conspiracy.

And if so, I disagree with that. Strongly.

I should clarify that the avoidance seems to apply more to mainstream print books than to books from digital/small press publishers. There’s definitely an openness to strong language in some of the digital science fiction romances I’ve read. And I’m certainly not advocating gratuitous cursing. It really should be organic to the story. However, I suspect some authors would use more authentic terms if the standards among publishers were more flexible.

While reading the passage in question, I’ll admit part of me was like “Oh, c’mon!” because I had a difficult time believing a man would tell another man not to swear—at least in the situation described. These were ragtag characters on the fringes of society. I could buy it slightly more if a “good gal” heroine was trying to tame a hero who curses even though I’d be thinking she really ought to straighten out her priorities.

Will some people always be telling other people not to swear, no matter the time period? I’m not sure if I had such a strong reaction to the scene because I felt like there was a “cursing is wrong no matter what the situation” subtext, or because I didn’t buy that profanity would be such a big deal in the far future (during which the story is set). Maybe a little of both.

I understand that strong language offends some readers, and obviously swearing can be terribly hurtful and abusive behavior. But on the other hand, we're talking fiction here. Euphemisms, no matter how clever, lack the same punch of common curse words (some of which, like “damn,” have been around for what, centuries?). Sometimes I wonder about the point of using an alternate futuristic curse word when all it makes me think is, "Well, what the character is really saying is "f---."

Still, I think there is enough variety in SFR that readers can find stories that meet their comfort level. In other words, let’s enjoy stories that don’t contain strong language, and also embrace those that do.

What are your thoughts about cursing in science fiction romance? Do you mind if the hero and heroine swear? Do some words bother you more than others?

Authors, are there times when you wish you had more freedom regarding strong language? How much of a role does worldbuilding play? Is it an opportunity for creativity or a convenient way to avoid having characters use contemporary curse words (especially in the context of the romance genre, regarding books published by romance publishers)?