Toward the end of 2010, Galaxy Express passenger Penny tipped me off about a mass market paperback re-issue of Johanna Lindsey’s WARRIOR’S WOMAN. If you’ll recall from my previous post, this was a book I could barely start, let alone finish. Not that that actually has any bearing on this current topic, ahem. Penny informed me this edition is on the shelves at Wal-Mart, and shares the same cover as the Kindle edition. Take a looksee: 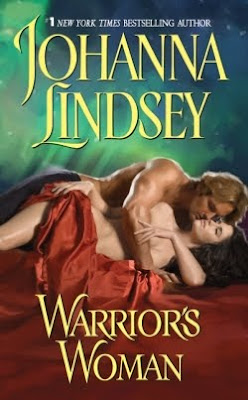 Rather interesting. Who is the target reader, I wonder? Even the original cover had more genre elements going for it. Well, at least the starry backdrop did. What changed in the intervening years? Seeing this new cover and other SFR covers before it makes me wonder when genre elements became the kiss of death for science fiction romance. Why would mainstream print publishers embrace them earlier in the subgenre’s history, but not as much now?

In a general way, this cover bland-itization reminds me of all the downright wild & “out there” television shows that aired in the 1970s, shows that we are probably never going to see the likes of again. (Case in point: LEGENDS OF THE SUPERHEROES from 1978. The audio stinks, but you’ll be highly rewarded if you watch at least a minute’s worth!) Based on my experience, I’d say the television executives for the three main networks at the time took some mighty big risks back then. These days, the norm seems to be ultra cautious. There are exceptions, of course.

Is this outdated look for the WARRIOR’S WOMAN re-issue going to help sell the book? I’m curious as heck over the potential reaction of Wal-Mart customers who will purchase this book based on the cover and discover the SFR within! Does the venue make that much of a difference in terms of how a book is packaged? Realistically speaking, I suppose it does.

But wait—maybe HarperCollins has a unique, innovative strategy in mind. It’s possible their goal was to repackage the book and get Wal-Mart and Kindle customers so fired up about science fiction romance despite themselves and any previous adversity to such stories that they’d run en masse to their computers after finishing the book in order to Google this new-fangled thing called “science fiction romance”!!!! *Pumps fist*

No? Not even a little bit possible? Sigh. Well, while we wait for the hordes of new fans to show up on our doorstep, we can enjoy the SFR-rich covers commissioned by digital/small press publishers (and the occasional Big Five publisher). Thank goodness at least a few industry folks are listening to customers.