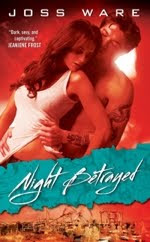 The Change that devastated the earth didn't destroy Theo Waxnicki. It made him something more than human eternally young, eternally beautiful ... but not immortal.

When he dies on a mission against the Strangers, he is lost ot the darkness...until a miracle lady brings him back.

Born during the apocalyptic storms and earthquakes that left the world in ruins, Selena has dedicated her life to easing the pain of others. But Theo is the first in her care to actually survive. Responding to Selena's tender touch, Theo starts to live again, to feel and desire again.

But joined in a world of terrors, the secrets they can never share make them targets. And love could be the ultimate betrayal. 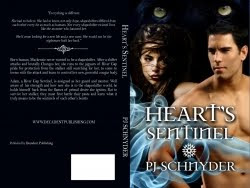 PJ Schnyder’s HEART’S SENTINEL, Book 1 in the Terra's Guardians series (Decadent Publishing) is now available in trade paperback. The author described the story to me as “a paranormal romance set in a post apocalyptic setting with sci-fi elements.”

In a post-apocalyptic world, humans rebuild cities of technology and shape shifters restore the wilds of nature. Mackenzie runs to the jaguars of River Gap pride in order to learn to live as something she never wanted to be – a shape shifter – and for sanctuary from the stalker who brutally Changed her.

Adam, a River Gap Sentinel, is assigned as her guard and mentor. Even though she ignites flames of primal desire in him, he holds himself back, well aware of his strength and how new she is to the shape shifter world. To survive the stalker, though, they both need to first battle their pasts and learn what it means to truly be the sentinels of each other’s hearts.

Authors After Dark posted the panel list for its 2011 conference. The conference will be held August 11-14th in Philadelphia PA.

(Thanks to Bev of Bev’s Books for the link.)

In her quest to unlock the secrets of what would make science fiction romance more popular, Jacqueline Lichtenberg of Alien Romances suggests crafting a kinder, gentler SFR in Failure of the Imagination Part 4: Teasing Off The Blinders:

So writers who want to remove the blinders from Romance readers' eyes, or from Science Fiction readers eyes, and let them into the world of Alien Sexuality have to find a gentler way of melting those blinders away, dissolving them, paring them away a layer at a time, teasing them off.

My thought in response to this passage is that removing such blinders might require a whole group of science fiction romance stories to accomplish such a feat, as opposed to one break out book.

Laurie A. Green posted a link to an article at the B&N SciFi and Fantasy Blog in which Paul Goat Allen shared his observations about science fiction romance’s evolution. In Shockingly Supernova: Who Knew Science Fiction Could Be So Sexy?, Mr. Allen says:

Today, in 2011, genre fiction has a dramatically altered landscape. The boundaries between genres have been blurred into nonexistence and genre hybridized releases like Warrior’s Woman are commonplace. Any stigmas associated with a particular genre, I believe, have faded away. Not only are there considerably more science fiction romance novels being released today, the thematic diversity has expanded as well. There has been an undeniable evolution – particularly in terms of innovative storylines and overall quality of narrative.

Welcome to my world, Paul!

Also, courtesy of Lindsay Buroker (ENCRYPTED), check out how the Kindle can help you promote your science fiction romance:

Brigade member LindsayB has posted a notice that may be of interest to published members on the SFR Brigade web site forums: Is Your SciFi/Fantasy Romance Available on Kindle? Contact her about plugging your book on the Kindle Geeks blog. Click the link to read or reply to the post.

Amy L. recently fired up the new blog Eat My Zombie. She sent me a fun post about 15 Gadgest Inspired by Sci-fi Fiction. Me, I’m a powered exoskeleton fan. Seriously, one is hanging in my closet right now. ;)