Thanks to the generosity of debut author Diane Dooley and digital-first publisher Carina Press, I'm excited to share an exclusive unveiling of the author's science fiction romance novella BLUE GALAXY (May 9, 2011). And I do mean exclusive—even Carina Press hasn’t featured the cover on its site yet. 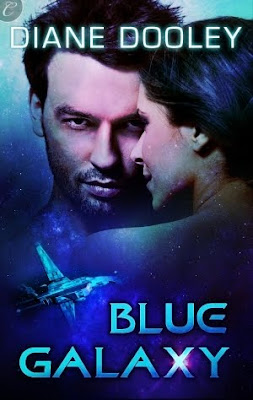 There’s no denying that this cover promises a science fiction romance. Despite the obvious fact that the portrayed hero is a model, I like the image chosen because he conveys a gritty feel (which is what the story blurb, featured below, promises readers about his character). His gaze is compelling enough that the cover would have worked equally well with him alone. I'm not getting a solid vibe on the heroine, but one could argue her pose lends her an air of mystery. Still, in terms of marketing and story transparency, the cover for BLUE GALAXY delivers. And, no man titty!

This cover also makes me wonder about a recent trend I’ve noticed, that of science fiction romance covers with a cool-blue tone. Not just with Carina covers like IN ENEMY HANDS (KS Augustin), either. Check out the covers (but hurry back!) for THE SLIPSTREAM CON (S. Reesa Herberth & Michelle Moore), THE FACILITATOR (Sahara Kelly), NAKED SIN (Brenda Williamson), TORN (K.D. King), and MECHMAN (L.J. Garland).

See what I mean? And now we can add BLUE GALAXY to the mix (although given the title, a bluish tone for the cover was practically a given). I wonder if there’s an unspoken consensus among digital/small press publishers that SFR in a space opera setting is best conveyed with an outer space feel. It’ll be interesting to see if this becomes a more solid trend, or if it’s just a design element that’s “in” at the moment.

Next, allow me to share the story blurb for Diane Dooley’s BLUE GALAXY:

Falling in love is easy; staying alive long enough to enjoy it just might be impossible.

Javan Rhodes, the hard-drinking, disreputable captain of space freighter The Kypris took a mission to save himself from hitting the bottom of the food chain. Transporting Sola, a beautiful young aristocrat, from Earth to an unknown destination on the outer rim of the colonies is lucrative, but also highly illegal.

As tough as it is to evade both the law and the lawless, the hardest part of the job is not falling in love with his irresistible cargo. But just as he decides that he will never be able to hand her over to the warlord she must marry, he discovers that Sola has been playing a very dangerous game – one that could not only cost them their lives, but could also affect the balance of power in an increasingly dangerous universe.

You know you want some! BLUE GALAXY is now available for pre-order at Amazon for the bargain basement price of just $2.39! And yes, I do believe that “Squee!” you heard right before this post went live was me as I pre-ordered a copy for my Kindle.

Here’s where you can find Diane Dooley:

She’ll also be a contributor to Carina Press’ CONTACT – Infinite Futures SF/SFR blog, so look for her posts there in the near future.

So, my fellow passengers, what do you think of the cover? Would you like to see more like it? Any thoughts on other possibilities for sci-fi romance covers, or need we look no further for our SFR cover formula?