"The Scene" From ENEMY WITHIN By Marcella Burnard 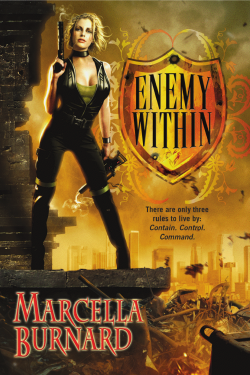 SPOILER ALERT! THIS POST CONTAINS A MAJOR SPOILER ALERT of ENEMY WITHIN by Marcella Burnard. This post is best enjoyed if you’ve already read her book. During the course of my post, I also refer to scenes of graphic violence within the story.

While it pains me to be writing a post containing a spoiler alert, it would pain me more not to blog about “the scene” in ENEMY WITHIN. If you’ve read the book, you know which one I’m referring to. Even so, I will refrain from providing too much detail in case anyone decides to read this post before the book.

First, the set up. The heroine is Ari Idylle, a military space captain in a galaxy far, far away. After being captured, imprisoned, and tortured by a non-humanoid race known as the Chekydran (think: smaller, meaner versions of Jabba the Hut), Ari is released for reasons unknown.

At the start of the story, a barely-recovered Ari has been assigned to work with her scientist father. The adventure begins when a band of pirates led by hero Cullin Seaghdh hijacks the ship.

Lots of other stuff happens.

In the final scenes, Ari must once again return to the clutches of the Chekydran, specifically, her former nemesis Hicci. And yes, there’s a reason she takes this mission instead of the hero. The plot races toward a face-off between Ari and Hicci. This is where things get verrrrrrry interesting.

During the face-off, Hicci sexually assaults Ari. However, because he’s non-humanoid, the attack has a different angle than would be the case if a physically compatible humanoid had been the perpetrator. I won’t go into further details except to say that Hicci’s behavior parallels that of a rapist.

I found this scene thought-provoking for several reasons. First, I’m a fan of stories where a heroine undergoes brutal physical assault during the course of her mission, especially since her role is to save the galaxy and, by extension, the hero. Scenes like this raise the stakes considerably. A heroine playing this role feels fresh to me (as opposed to the hero taking charge when things get super tough) and also empowering.

Another detail that got me thinking was the nature of the assault itself. Ms. Burnard doesn’t go into every last detail; rather, she adds a touch of detail here and there in order that the reader’s imagination takes care of the rest. Still, readers witness a very intrusive sexual assault. Of particular interest to Hicci is Ari’s blood. Her blood seems as attractive to him as breasts or other intimate parts would be to a humanoid male.

I should also add that the Chekydran have been tinkering with the biology of their enslaved humanoid adversaries. Based on my reading, the Chekydran know a lot more about humanoids than humanoids know about them (probably because according to the story they’d captured and studied so many). Of the three races in the story, the Chekydran were the most “alien,” at least from this human’s perspective.

As a result, I began wondering some more about this scene. Because of the vast differences in the genetic makeup of the two races, to what extent could an alien race composed of tentacles and other slimy parts find any part of a human/humanoid attractive? On the other hand, was this like some sort of sexual fetish? Would it be possible, say, for a human to develop a fetish for insects? Never say never, as they...say.

Clearly, Hicci wasn’t just getting off on the physical contact. He relished the power and control he had over Ari at that point. But his physical enjoyment of the act was very palpable.

In some ways, because Hicci was non-humanoid, I felt a little distanced from the horrific nature of his act. It could be that his alien nature lent the scene a level of unreality (i.e., “This could never happen to me”). Another possibility is that I hadn’t adjusted my expectations enough to absorb the idea that his sexual assaults were on a par with his combative ones (because he beats her, too, and I bought that aspect hook, line, and sinker).

Furthermore, while the scene was intriguingly disturbing, it prompted me to speculate about how I would have felt if Ari had been raped by a physically compatible humanoid (and as in the story, after her relationship with the hero had been firmly established).

Would I have been comfortable encountering that type of torture in a science fiction romance? My answer is that I would, but I’d have the expectation that there’d be a whole lotta healing and comforting happening once the heroine was back with the hero, or at least the promise of such by the story’s end. Rape is an envelope-pusher, so a good execution would be key.

But then my brain went in yet another direction (I did say that Ari’s torture scene was thought-provoking!): What if the hero of ENEMY WITHIN was sexually assaulted by Hicci? After all, Ari’s gender didn’t seem to have anything to do with Hicci’s attraction (in other words, Ari herself was the target). That was my interpretation, at any rate. This story could have placed Cullin in the torture scene face-off. Or let’s consider a different story entirely that included that kind of assault. What would my reaction have been to that?

I’m betting I would read that story.

If you’ve read ENEMY WITHIN, what did you think of Ari’s torture scene? If non-humanoid aliens sexually assaulted humans/humanoids in the course of a story, would it matter to you whether it was the hero or heroine? Why or why not?