How To Read Science Fiction Romance

Contrary to what you might think, this post is not about ABC’s, grammar, or how to open a book. Rather, what I’m about to explore is that even though I believe science fiction romance is the Great Undiscovered Subgenre, many folks don’t share the same mindset. Oh, the pain, the pain! Despite an occasional tendency to sulk a wee bit over that issue, I understand exactly why.

But what if someone were to take an interest in SFR? What kind of expectations should he/she be armed with before taking the plunge? In order to answer—or attempt to answer—that question, I’d like to take a moment and study a chapter or two from the life of one of Hollywood’s most innovative filmmakers.

In addition to my usual science fiction romance fare, I’m in the middle of reading Beverly Gray’s ROGER CORMAN: An Unauthorized Biography of the Godfather of Indie Filmmaking. If you’ve never heard of Roger Corman, he’s often known at large for churning out cheap (but profitable) bad films. There’s lots of great material to discover about Roger Corman in this book, but one quote in particular really stood out for me.

One of Roger Corman’s filmmaker “graduates” was reported to have never shown “his Corman pictures…as samples of his work.” The reason? “Not because they’re bad movies, but because maybe people don’t know how to watch those movies.” (pg. 181)

That quote prompted me to reflect on how I approach a Roger Corman film (BATTLE BEYOND THE STARS being a prime example since it’s my favorite film of his to date).  I have to approach them with a certain mind set. Here’s why:

* Back in the day, Corman took risks. He took risks with stories, unknown writers, directors, actors, and a host of other film industry personnel (this includes his penchant for hiring women in key power positions behind the scenes). He also connected audiences with niche foreign films long before companies like Miramax came onto the scene.

* Low budget films were his forte. This actually served as an advantage at times since, for example, his directors were forced to craft compelling scenes sometimes using as little as one take. Therefore, they had to make that take count. Put another way, the extreme budgeting occasionally translated to clever, inventive films.

Therefore, I frequently judge a Roger Corman film based on what the filmmaking team probably *intended* to deliver vs. the final product. If I insisted on watching only films with blockbuster budgets, I’d have an awfully small DVD collection.

* Roger Corman films often contain lots of action, violence, and a gratuitous amount of T&A—tits and ass. Corman knew which elements would help sell a film and he exploited them with abandon. It’s no accident he’s become one of the greatest legends of Hollywood, and that his efforts have spawned mega talents such as James Cameron, Martin Scorsese, and Ron Howard. Corman possessed a keen sense of what audiences wanted, and he wasn’t afraid to give it to them.

* A Corman film will take a trend by the horns and run it into the ground with countless knock-offs. This aspect is an advantage to movie lovers who won’t get to see more than one AVATAR every twenty years or so. While Corman’s films lack big budgets, A-list stars, and state-of-the-art special effects, at the height of his reign he reliably churned out films that audiences couldn’t devour fast enough. 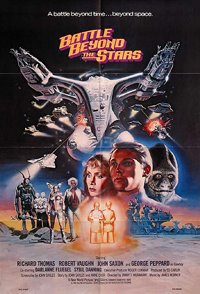 So if one can make it over all the hurdles of a Roger Corman film, a fun movie experience awaits (generally speaking, because he also produced some bona fide duds).

Which brings us to science fiction romance. As with Roger Corman films, reader expectation plays a significant role in being able to enjoy this hybrid subgenre. Readers going into a science fiction romance story for the first few times must be willing to adjust their expectations. Otherwise, they risk a sort of “entertainment culture shock” in which the only logical conclusion about the story, regardless of quality, is “WTF?” I imagine many people have had the same reaction to a Roger Corman film.

The quote “Not because they’re bad movies, but because maybe people don’t know how to watch those movies” made me think of science fiction romance. Maybe potential fans don’t yet know how to “read” them, i.e., which expectations to have. I’m certainly not immune: Once upon a time, I had an eye-opening experience with martial arts films.

Like a Roger Corman film, it might help to prepare potential readers about what to expect, especially since many of the stories take risks and many settings are downright fantastical. Some of my own expectations about sci-fi romance include the following:

* I want something different (meaning a “new frontier” different; not “the same, but different” different).

* I want diversity in plots, heroines, heroes, and settings.

* I’m willing to take a chance on stories that take risks or subvert tropes.

*I’m willing to search in new mediums and/or off the beaten path for SFR stories, and accept the risk involved (e.g., variation in quality). I also anticipate that covers aren’t always indicative of quality, regardless of medium.

* I’m willing to educate myself about the differences in the ratio of SF-romance content across authors, publishers, books, and time periods. This includes elements such as plot, heat level, the types of science/technology used, and plausibility.

* I’m willing to anticipate both the SF and romance elements not just before I begin a sci-fi romance, but also while reading the story. In other words, I accept the need to shift mental gears in media res.

Often, great stories will pave the way for readers willing to adjust their expectations. The key lies in discovering which combination of elements will deliver a bang for readers the way Roger Corman did with his insistence on including countless scenes of T&A in his films, among other things.

I don’t think we have to go that far, but clearly he was onto something. What are your expectations regarding SFR in general? What do you think science fiction romance can take away from the School of Roger Corman?