An Interview With S. Reesa Herberth & Michelle Moore, Authors of THE SLIPSTREAM CON 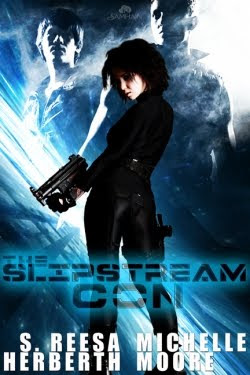 Though THE SLIPSTREAM CON (April 2011) is the second book in S. Reesa Herberth and Michelle Moore’s Ylendrian Empire series that begins with THE BALANCE OF SILENCE, the novella can be read as a standalone. Think: space opera caper ménage (m/f/m).

But if your eyes just glazed over at my mention of ménage, check this out:

Visit Samhain Publishing to read an excerpt. Beyond that, here are a few non-spoiler details about some of the story’s key elements:

The three main characters are bounty hunters Tel and Vanya, who are married, and their target Kellen Frey, galactic con artist extraordinaire. Needless to say, with this type of heist story, there’s lots of crossing and double crossing that keep the reader guessing as to where this three-way relationship is headed—or not.

The story is character driven in that Tel, Vanya, and Frey take time to process their mutual attraction both internally and through dialogue. You’ll also encounter a character with a secret past and skeletons in the closet. On the skiffy side, there’s a superhuman character with a neat nanotech angle, although this aspect isn’t the main focus of the story. Maybe for a future book? Hint, hint.

At any rate, I invited the authors aboard for an interview so we could learn more about their work and they kindly accepted. Without further ado, I’d like to introduce you to S. Reesa Herberth and Michelle Moore:

The Galaxy Express: How did you come up with the title for THE SLIPSTREAM CON?

Reesa: It was actually intended to be the working title, but we liked it so much that eventually we found a way to make it relevant to the plot so we could keep it. It was just something I threw on the document because it sounded slick.

Michelle: Reesa knows how antsy I get when names change. Character name changes are bad. Title changes make me twitch, so she worked really hard to keep it as Slipstream. Oddly enough though, I don’t have any recollection where the word slipstream came from. It must have been Reesa’s brilliancy. 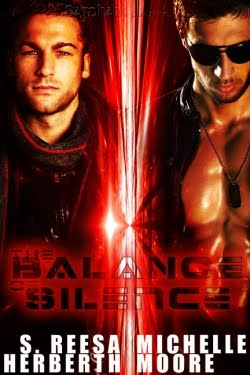 TGE: THE SLIPSTREAM CON is the second book in your Ylendrian Empire series (THE BALANCE OF SILENCE being the first). Should the books be read in order, or do they work as stand alones?

Reesa: They are absolutely stand alones at this stage, but very firmly in the same universe. We have a lot of fun writing in small mentions of events that took place in other stories, or brief interactions with characters who show up elsewhere. If you’re going strictly by the timeline, The Balance of Silence takes place slightly before The Slipstream Con.

TGE: Given the various empires populating the settings of science fiction romance stories these days, what unique discoveries will readers make about the Ylendrian Empire?

Michelle: Wow, this is a tough question. I mean, on the most obvious level, the Ylendrian Empire offers Kellen Frey, and that’s a huge plus. But as far as discoveries for the reader, I think we offer a truly Universe-wide representation of Empire citizens. Top to bottom, royalty to commoner, law officers to murderers, we've got 'em all.

Reesa: Without being really conscious of it as we wrote, I think you can see a lot of Ylendrian history coming out in the way the society stands today. For example, one of the three founding races, the Trikorans, have a fluid outward gender that changes at will. For them, placing taboos on relationships based on the gender of the people involved wouldn't work, and because of that influence there's really no societal prejudice against same-sex relationships in Ylendrian culture.

At this point there are a lot of unexplored corners of our universe, and while I don't know that we've found a way to re-invent the wheel, I can promise readers a hell of a lot of fun while they explore it with us.

TGE: Tell us a little bit about Kellen, Tal, and Vanya. Do they each have any special talents? What types of weapons do they carry? Boxers or briefs?

Reesa: I think they all have some pretty specialized talents. Without giving too much away, I can say that Kellen is a pretty accomplished art thief and forger, and he can make pancakes in fun shapes. Tal’s ex-military, and while he got some really useful skills out of his time there, I think his real talent is falling in love with difficult people. Vanya’s special talents? I’m gonna go with being quietly scary!

Kellen doesn't carry weapons- prefers to avoid them entirely, in fact. Tal and Vanya both carry a blast guns, which are basically beam weapons designed to do enough damage to slow someone down without killing them. Tal’s a sniper, and carries a rifle. Projectile weapons are kind of a throwback in the Empire, but Tal likes the classics.

Michelle: And Kellen would like to point out that while some of Tal’s choices may be problematic, he has excellent taste in clothing. Silk paisley boxers, please.

TGE: How would you rate the heat level in the story?

Michelle: While the attraction between Kellen, Tal and Vanya has been there for longer than any of them would probably like to admit, the actual heat level is more of a sizzle than a flame in Slipstream. Tal is the moral compass of the three, and he has issues about starting a relationship with someone he intends to send to prison. But even with all the best intentions in the ‘verse, there are times when common sense takes a back seat…

TGE: How would you rate the action-adventure level?

Reesa: In Balance, a lot of the grittier action takes place off-screen, with the focus of the story falling on the internal conflict of the characters. For all that the things Riv and Ducks faced were pretty horrific, I think Balance might be a sweeter romance than Slipstream, which is very action-packed. I think the characters in Slipstream are less cautious with each other. Slipstream is pretty fast-paced, so I'd say pretty high on the action-adventure scale. There's a lot of world-hopping.

TGE: What was the path to publication like for these books?

Michelle: Balance of Silence was actually first submitted for a space opera anthology call put out by our awesome editor Sasha Knight. While she didn’t sign it for the anthology, she said that if we were interested in expanding the story that she would love to see it. We did, she did and Balance was published with Samhain! Working with Sasha was such a great experience that there really wasn’t any question about where we wanted to submit Slipstream when the time came.

TGE: As a writing team, how do you balance the various responsibilities of story execution?

Michelle: Turns out the adage about old married couples finishing each other’s sentences, while not necessarily an asset socially, really comes in handy when you’re writing together! When we’re in our groove, it’s effortless. We can pass the story back and forth at the end of a chapter, the end of a scene, the end of a paragraph and sometimes mid-sentence, and the other person picks it up and runs.

Reesa is the great “what-if” person, though. Most of our story ideas are thanks to her… otherwise we’d be sitting around staring blankly at each other with a boatload of characters and nothing for them to do. I do get to claim credit for the idea for Balance, though. It was directly linked to my fascination with Britain’s “Piano Man” case in the summer of 2005.

Reesa: Sometimes my “what-if” problem gets the better of me, but Michelle hasn’t run away and changed her email address yet, so I guess it’s still falling into acceptable levels. No promises if I make her change a main character’s name again, though!

TGE: Got any tips for evading intergalactic bounty hunters?

Michelle: For goodness sake, don’t fall in love with them! Guaranteed that’ll mess up your long-range plans. And the in-laws are a nightmare.

Reesa: Catch them before they catch you. 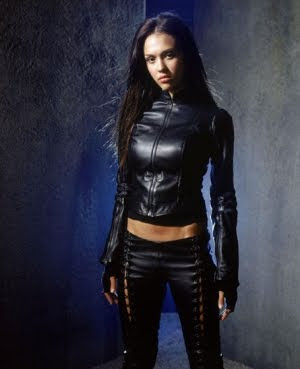 Michelle: Firefly, hands down for me when it comes to TV. As far as films, I’m a Star Wars gal. It was a huge part of my formative years (which is probably an age-giveaway).

Reesa: Hey, Michelle stole my answer! I’m a huge Firefly fan as well. I really liked Dark Angel when it was on, and I think that had a pretty decent romantic subplot to the sci-fi.

Both my parents read sci-fi, and when I was about 9, they pointed me towards their shelf of Heinlein and told me to pick my own out. I read Farmer in the Sky and a couple of the other juveniles first, but then I read To Sail Beyond the Sunset, and I was hooked on the human, romantic element in sci-fi for good. I wouldn’t say it’s the best book for your 10 year old to be reading, but to be fair to Mom and Dad, I’m pretty sure they thought I was going to pick up Red Planet or something.

If they are looking for our blog, or more info about any of our work, they can check out our author website at:

If they want more background on these stories in particular, including an ever-expanding lexicon of characters, planets, and terminology, they can give the Ylendrian Empire website a shot:

Michelle: As far as stories set in the Ylendrian Empire, our current WIP is tentatively titled Peripheral People. It’s a little darker than the previous two stories, revolving around four agents with the Imperial Enforcement Coalition in search of a serial killer. Still in the planning stages (i.e. characters in search of a plot) are Del and Denny’s lives before Balance. I’m really chomping at the bit to start this project, but it’s got to be the right story.

Reesa: I’m really excited about the ways the Empire is expanding in Peripheral People. I think it’s going to be a lot of fun for people to see more about how the history of the Empire has shaped their culture. I’m also working on a solo project, a kind of post-apocalyptic story about accidental isolationists, bloodthirsty river otters, and a family of mutant artists who don’t obey the speed limit. Somewhere in the mix, there's also a short story featuring Tal, Kellen, and Vanya.

Ms. Herberth and Ms. Moore, thanks so much for your time, and for your art.

And there you have it, folks! If anyone has any questions for the authors about their work (a “sweet” ménage—who knew?!), leave a comment and they’ll be here to answer you.