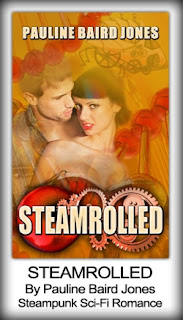 Clearly, L&L Dreamspell made a real effort with this cover. The couple conveys romance as well as setting. The colors are in line with other current steampunk romance releases, which is a plus as far as branding the subgenre as a whole. Plus, the “transmogrification” time machine from the story makes an appearance in the background. Sweet.

Also, my guest post is up at Carina Press’ CONTACT – Infinite Futures blog in which I speculate about the possibility of Reinventing MACROSS For Science Fiction Romance:

Might it be possible to entertain the idea of a serialized sci-fi romance series featuring one main couple, with both the story and romance arc extending over the course of a series of novellas, perhaps? Would this type of feat be possible in the digital medium? I believe so. Especially if readers are made clearly aware that the first novella/short is the start of a series. Naturally, the story could eventually be sold as a complete story, but I’m partial to the idea of reading this kind of saga one section at a time in order to capture the heightened sense of anticipation that episodic releases would promise.

I’d love to get your input on the idea. (Thanks again to author Lilly Cain for the invitation!)