Are Sci-Fi Romance Heroines Too Sexually Submissive On Covers?

When SF Signal featured Lisa Paitz Spindler (THE SPIRAL PATH) in one of its New Author Spotlights, Athena Andreadis, an author and molecular biologist who founded Starship Reckless, shared her observation about the book’s cover:

The trailer looked interesting but the pose of the two protagonists on the cover is bad. I wish they would stop diminishing powerful women by giving them submissive sexual stances. 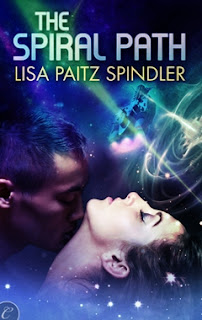 I had three reactions to Ms. Andreadis’ comment. The first is that yes, sometimes there’s a disconnect between powerful, progressive heroines in science fiction romance stories and the submissive ones on covers featuring a couple. Given a choice, I’d rather see a hero and heroine presented as equals, regardless of whatever scene is being played out. Even if all kick-butt heroines are fans of the missionary position, showing that element on a cover over and over again isn’t going to sell me on them.

Catch my eye with their unique characteristics; sell me on the romance between two equals.

The second reaction I had is that in romance stories there’s a focus on the validity of the heroine’s sexual needs. One reason a romance hero is considered heroic is because he’s all about giving the heroine pleasure and putting her needs first. The illustration on THE SPIRAL PATH isn’t about submissive behavior when considered in the context of the story. Having read this novella, I can tell you that hero Mitch Yoshida doesn’t subjugate Lara Soto or diminish her power at all. The image is probably meant to convey that he loves her and is selflessly giving her all the pleasure he can. If that was the intent, it’s certainly backed up by the story.

Unfortunately, many SFR covers are more concerned with “sex sells” than with any other aspect of a story. On the other hand, heat level is a valid element to portray in a cover when the story has love scenes, especially spicy/erotic ones. A question arises, then, as to whether heat level can be conveyed more often without diminishing powerful heroines.

My third reaction—or maybe I’m up to six or seven now (!)—was the realization that there are practical considerations as well, which I touched upon in my response to Ms. Andreadis in the comments:

The big challenge regarding poses IMHO is that publishers rely so much on stock images, and it seems to me the chances are few that photographers would think to capture more shots featuring the women in an equal (or even dominant) stance. So publishers end up with fewer choices, and as a result reinforce the submissive sexual stance because that's what's being purchased most often (from what I've seen, at any rate).

In light of the limitations of stock images, is it too much to ask that publishers nail a character’s ethnicity (as in the case of Mitch) and place the heroine in an equal sexual position? Is there a way to reconcile the visual depiction of powerful heroines (especially of the kick-butt variety) and the idea that the story contains a hero that will meet her sexual/intimacy needs?

I believe we can at least make an attempt to avoid placing heroines in sexually submissive positions. Not all authors have input on their covers, but those who do can ask that their covers depict their heroines in positions that reflect their power and equality—regardless of heat level. Readers who are invested in the issue can give publishers and authors feedback about covers via emails, blog posts, and discussions in online forums.

What are your thoughts?