My Take On THE ADJUSTMENT BUREAU 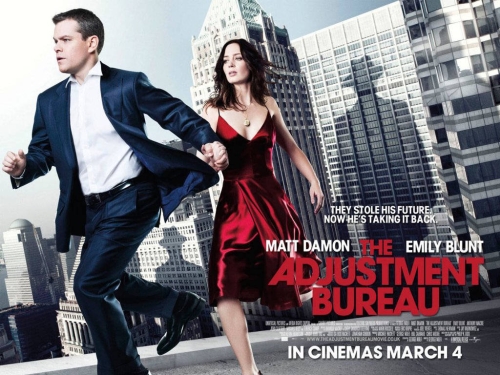 Back in May 2010, I blogged about the fact that THE ADJUSTMENT BUREAU, a film adapted from a 1954 story by Philip K. Dick (“Adjustment Team”) was being billed as a “science fiction romance.” I was so excited, in fact, that I made a commitment to “pony up the cash to see it in the theater,” (a big deal for me since these days I usually reserve my cash for blockbuster films like AVATAR or director Christopher Nolan’s Batman films). But since this film was specifically categorized as SFR, I happily took the plunge.

Here’s the story blurb from the official site:

Do we control our destiny, or do unseen forces manipulate us? Matt Damon stars in the thriller The Adjustment Bureau as a man who glimpses the future Fate has planned for him and realizes he wants something else. To get it, he must pursue the only woman he's ever loved across, under and through the streets of modern-day New York.

On the brink of winning a seat in the U.S. Senate, ambitious politician David Norris (Damon) meets beautiful contemporary ballet dancer Elise Sellas (Emily Blunt)—a woman like none he's ever known. But just as he realizes he's falling for her, mysterious men conspire to keep the two apart.

David learns he is up against the agents of Fate itself—the men of The Adjustment Bureau—who will do everything in their considerable power to prevent David and Elise from being together. In the face of overwhelming odds, he must either let her go and accept a predetermined path…or risk everything to defy Fate and be with her.

Since my original post, I avoided reading about the film and didn’t even revisit the trailer in order to approach it with as few expectations as possible. I did feel some trepidation regarding how the romance would be handled since it’s difficult to discern elements like chemistry from a trailer. And learning that the heroine Elise Sellas (Emily Blunt) was a dancer made me wonder if she’d be little more than ornamentation. A past experience with a ballerina heroine in SFR had left me rather cold.

Admittedly, it was a thrill to go into a movie knowing the filmmakers or the marketing team or both wanted me to expect a science fiction romance. I’m sure there was a bounce in my step as I entered the theater. Unfortunately, in some ways, a sci-fi romance wasn’t exactly what they delivered.


THE ADJUSTMENT BUREAU was a decidedly mixed bag for me. Without going into spoilers, I’m going to discuss what I enjoyed as well as highlight a few issues that I wish had been strengthened.

Ironically, the thing that I was worried about the most was the element I liked the most: the romance. In terms of balancing the romance and science fictional elements, THE ADJUSTMENT BUREAU did a great job. Yes, the filmmakers took shortcuts, but the performances of Damon and Blunt went a long way toward convincing me of the characters’ chemistry. The tone of the relationship worked for me, very playful and sweet without being saccharine. Elise is sassy and a relentless tease, but David gave as good as he got. It also helped that their dialogue was decent and they joked around a lot.

This story is basically told from David’s point-of-view and is about his journey. I enjoyed that aspect, but could also smell the Hollywood hero formula at work. Elise had the potential to be a really good heroine and I wish she’d been given more to do. As it stands, she was the cause worth fighting for and nothing more. There’s a reason for that, but I still would have preferred that she have more involvement in the science fictional elements.

I enjoyed the contemporary/near future feel of the story. That was a nice change from the space opera tales I usually consume. THE ADJUSTMENT BUREAU has quite a few chase scenes (mostly on foot), but it’s more of a quiet, character-driven story that invites viewers to contemplate its themes.

What didn’t work so well for me were the science fictional elements. These were meager as well as relentlessly and frustratingly vague. In fact, it seemed as though the story wanted to have it both ways: certain characters featured in the film have either supernatural or alien origins. It’s never fully explained. There’s one scene that paints a picture of unusual technology at work, yet in another scene there are references to supernatural beings. Gah! I sense a disturbance in the Force regarding the definition of “science fiction.”

Stylistically, THE ADJUSTMENT BUREAU reminded me of DARK CITY, one of my all-time favorite films (I previously blogged about it, natch). DARK CITY fully embraced the alien origins of the Strangers and brought new ideas to the table. THE ADJUSTMENT BUREAU felt like an old hat by comparison (pun intended, you see, because hats factory significantly in the story), and not just because it was based on a story from 1954. Perhaps the filmmakers wanted to stay true to the story’s origins, but I felt they could have added new material without compromising the basic underpinnings. (BLADE RUNNER, also based on a story by Philip K. Dick, does exactly that).

In the end, I walked away wondering to what extent THE ADJUSTMENT BUREAU was actually science fiction. Perhaps a more apt description would be supernatural thriller romance. I wouldn’t say there was a bait-and-switch involved in terms of marketing. Rather, I wondered if at some point someone had gotten cold feet regarding the SF elements as they felt very tentative.

My frustration also stems from my concern that the villain (actually a collective of villains) didn’t seem to have any real purpose and hence didn’t pose much of a threat (oh, yeah, remember my post about villains? Wish the filmmakers had read that or something before going into production). I might have been able to forgive some of the film’s other flaws if the villain’s intentions had been more nefarious (if you’ve seen both DARK CITY and THE ADJUSTMENT BUREAU, you’ll know what I mean).

If nothing else, seeing this film made me want more like it. I might even watch it again on Blu-Ray and I’m keeping my fingers crossed that there will be some good extras because I’m curious about what went into the making of this film. I hesitate to recommend it as a bona fide science fiction romance, but the performances and romance are compelling enough that SFR fans might want to check it out on home video.