Parallel Universe: What's Wrong With So Much Pounding Sex? By Jacqueline Lichtenberg

I post on Tuesdays on aliendjinnromances.blogspot.com where I've been poking and prodding at the problem of why the Romance genre, but particularly SFR and PNR, just don't seem to gain the respect they deserve.

Respect is one thing; popularity another.  Romance is ridiculously popular, but Romance readers don't carry their books around to impress people with their educated artistic taste.

That situation has persisted through several waves of change in the genre, including the advent of hybrid genres such as Vampire Romance and Science Fiction Romance.

Nothing we do seems to please the discriminating taste or to gain automatic respect for those who read SFR and PNR.

It seems to me that the Romance Genre (and its readers) is out of step with the social and cultural waves of change from generation to generation.  SFR and PNR particularly appeal to the Child Within, to hopes, dreams, plans, and a sense that we can make it real. Science Fiction is focused on "the future" while Romance is focused on "My Future," the personal destiny we want to mold for ourselves.

That sense of "we can make it real" is rooted in the sure knowledge that at the moment, it's not real, at least not in our own lives.

And that is exactly where Science Fiction was in the 1950's when its readers were most despised!

SF was exploring life on other planets when our general society "knew" there weren't other planets, never mind "life."

Now we know there are lots of planets like Earth out there.  So Science Fiction doesn't write much about them, and the roaring vitality of speculative fiction has shifted to the Fantasy genres, like PNR.

In PNR, Romance has forged ahead of society, confronting and exploring the place of sexuality in human personal Bonding, in personal life, and the life of a two-thousand-year-old civilization.

This is a major philosophical argument currently ripping the Middle East to shreds and pitting it against the entire "Western Way Of Life" -- yet Romance has been delving into the morality, spirituality, magical power, and Soul's Salvation of pure, raw, human bodily sexuality for decades.

Just as Romance Genre once leaped way ahead of modern society (which wasn't interested in History) and explored Regency England's culture, and then Scotland, and other Historical venues, presenting details of dress, manners, and the problems of women in stratified society, so now Romance has leaped ahead to explore womanhood in worlds where the supernatural is as powerful as science, or more so.

PNR has penetrated the smokescreen of minor issues such as Religion vs. Science or My Religion vs. Your Religion, to discuss the real core philosophical problems such as Good vs. Evil and Humanity vs. Nature. 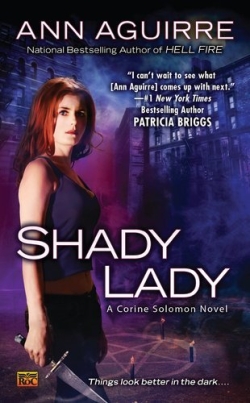 I've been reading a lot of those lately, and recently Ann Aguirre's Corine Solomon novels. (http://twitter.com/#!/MsAnnAguirre)  Shady Lady is the current title (Full Disclosure: one quote in the praise for the novels section at the front is from "Lightworks" and is a quote from my September 2010 review of Hell Fire).

"Corine Solomon" is the main character in these First Person action/romance/suspense/ fantasy novels.  In Shady Lady, she is told by a partially supernatural hunk who claims to be a Hand of God, is tattooed with Angel's names, and claims to have been assigned to protect her, that she is a direct descendent of King Solomon (yes, from the Bible, who built the Temple access to which is so in dispute currently.)

Corine Solomon is American but lives in Mexico and has become a bone of contention between two huge drug cartel overlords.  If you have followed the Mexican border news, you know that evidence is now turning up that there are some business ties and methodology similarities between the Middle East terrorists and the Mexican Drug Cartels.

The Corine Solomon novels are Fantasy - true - but just as the Regency Romance requires a huge intellectual investment in learning history, this novel series requires a vast awareness of current events.

Romance aficionados can't be empty-headed vapid wimps.  People who read and write novels like the Corine Solomon novels ought to be regarded with shivering awe by the general populace.  These novels provide an intellectual stretch, a philosophical stretch, an emotional stretch and the ambition to solve tomorrow's problems today.

In future posts on aliendjinnromances.blogspot.com, I want to discuss the philosophical significance of sexuality as portrayed in various Romance sub-genres. Trust me, this won't be "over the head" of any inveterate reader of Romance!

Learn more about the books at http://astore.amazon.com/simegen-20.
Posted by Heather Massey at 9:00 AM
Newer Post Older Post Home