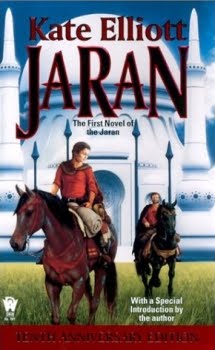 I’ve been following some of the recent discussions about the “male gaze” in SF/F, starting with Sherwood Smith’s “Women’s” and “Men’s” Fantasy article at Book View Café and continuing with Kat Howard’s Putting Women in the Story. The most recent one I read is Kate Elliott’s piece on Women and Fantasy.
From Ms. Smith’s article:

…the male gaze is still the default cultural point of view. That means, whenever men look at is important, from persons to politics to entertainment. It is important for everybody. Whatever women look at is for women, of lesser significance.

There’s a lot of relevance for science fiction romance in this discussion since SFR is a subgenre that, in part, attempts to correct the imbalance of male-dominated science fiction, both in terms of content and authorship. The subgenre strives to make the female gaze more visible and also give it a stronger voice.
The challenge, of course, is battling that “default cultural point of view.” Can science fiction romance ever break out of the niche if the books written by women authors and featuring female-centered issues are deemed of “lesser significance”?
While reading the articles, I started doing some reflecting. I grew up steeped in “male gaze”—or more accurately, “male field of interest”—SF stories, but even as I surrounded myself with science fiction fare, I realized something was missing, and that was the female gaze/field of interest. I craved stories that were more character-driven and incorporated romance. In short, stories with issues/perspectives that spoke to me as a woman.
However, the issue goes beyond story—it’s about female field of interest tales being perceived as having value by general society. In other words, the ideal would be to reach a point where SF with romance is viewed as just as important as idea-driven SF.
What would be the proof that such value had been achieved? Well, female authors getting reviewed as often as male authors, for one thing:

What this means, surely, is that VISIBILITY is the first obstacle or, if we combine visibility with Loyal’s statement about flaws and importance, it may be suggested that male writers are routinely judged to be more worthy of reviewing OR they may simply be the ones who are noticed and picked up to be reviewed while others are ignored, dismissed, or never seen at all.

Obviously many writers, both male and female, do not get the visibility we would wish for them to have. I note also that there are now a huge number of book blogs that specifically target the Young Adult, Romance, and Urban Fantasy/Paranormal readers, often read and written by women. I think it is not a coincidence that these genres have strong sales by taking women seriously and granting them importance as readers, as writers, and as characters. At the same time I see admiration for the books and sales numbers, I do also sometimes see a fair bit of hostility directed at these genres from outside.

(Via Kate Elliott's article)
One aspect I appreciate so very much about sci-fi romance is that many if not most (all?!) of the stories in the subgenre offer elements that fall under the female field of interest umbrella. Often it’s the romance, but frequently stories deliver heroines that are strong (i.e., physically, emotionally), smart, and empowering. Sometimes it’s the technology that levels the playing field between genders (of all types).
One of my favorites is the concept of a hero and heroine uniting to save the day, as opposed to the idea of a single hero hogging all the glory. Unfortunately, the idea of an equal, two-person team conquering the odds and falling in love along the way is still very much an alternative way of approaching the hero’s journey in non-romantic SF.
Anyway, I’d love to hear your thoughts about the female field of interest in science fiction romance. What does it mean to you? What are some practical steps we can take to promote its value?
Joyfully yours,
Heather
Posted by Heather Massey at 8:45 PM
Newer Post Older Post Home