An Interview With Calista Taylor, Author of VIRIDIS 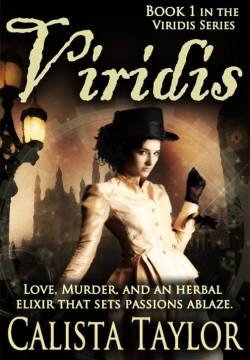 I have another steampunk romance to tell you about: Calista Taylor’s self-published VIRIDIS is a romantic steampunk mystery. Here’s the blurb:

In steampunk Victorian London, where airships dot the sky and tinkerings abound, Lady Phoebe Hughes develops an herbal elixir, Viridis, unlike any other. London’s elite flock to her club to experience the euphoria and heightened senses the drink brings, an orgasm brought on by a single kiss. But when Lord Hawthorne is murdered after leaving her club, Phoebe is shocked to find that not only was he working for the Special Services to infiltrate the Cause, a movement fighting for the city's poor, he was also in possession of her secret formulation for Viridis.

Adding to her difficulties is the unexpected return of Mr. Seth Elliott, a brilliant tinkerer who stole her heart and imagination, only to abandon her when she needed him most. Unable to ignore all that is between them, Phoebe finds herself falling for Seth once again, only to have a powerful rival for her affections wrongly accuse Seth of attempted murder. As Phoebe struggles with a way to free her love, revolution, conspiracy and murder threaten to ruin it all.

One thing I love about steampunk/steampunk romance is that there’s often an opportunity to feature heroines with jobs, whether legal or risqué. VIRIDIS’ Phoebe Huges is an alchemist, complete with a sophisticated lab where she experiments with the titular elixir Viridis (and the cool steampunk tech that such a lab promises). She also runs an elite club frequented by the rich, who flock there to experience the euphoric effects of her intoxicating concoction.
VIRIDIS also features a romance about reunited lovers. The romance is present and has an HEA, but isn’t a central component. Pheobe and Seth Elliot have separate goals, and the ambition they each had for their respective careers drove them apart prior to the start of the story.
Seth is what’s known as a tinkerer. From what I gathered, tinkerers are steampunk inventors. Tinkers like Seth are part of an organization known as the “Cause.” Their goal is to create devices that will improve the quality of life for England’s citizens.
VIRIDIS also features an ensemble cast of characters. Inspector William Thomas ties them all together as he seeks to unravel the mystery behind a young nobleman’s murder, one who was last seen at Pheobe’s club.
The story has erotic elements, but they aren’t as pronounced as I expected, especially given that Viridis enhances the senses (making the slightest touch orgasmic, for example). Most of the story focuses on solving the mystery.
The plot’s conflict and suspense weren’t at the level I would have liked, but your mileage may vary, especially if you’re not in the mood for anything too intense. While VIRIDIS doesn’t deliver quite the same punch as, say, George Mann’s THE AFFINITY BRIDGE, it’s in the same category of steampunk mystery stories and delivers far more romance.
Calista Taylor kindly agreed to an interview so we could learn more about the book. Got your goggles on? Then ready, set, go!
The Galaxy Express: Where did the idea for Viridis—the drug—come from? Does the name itself have any kind of special origin?
Calista Taylor: Though I primarily read mysteries, I also like steamy romances, and thought an herbal elixir that heightened one’s senses could be fun.  As for the name, I wanted something Latin in origin or Latin sounding.  Since the herbal is green in color, I decided to use the Latin root for green.
TGE: Pheobe and Seth have commitment issues to work out over the course of the story. What appealed to you about the reunited lovers dynamic?
CT: I like the depth that an existing relationship brings to the story.  VIRIDIS has some dark elements, and I felt that a shiny new relationship when everything still feels perfect wouldn’t work as well.
TGE: What kind of steampunk tone/themes can readers expect from VIRIDIS?
CT: I’ll admit that as far as steampunk goes, the emphasis is on the storylines and relationships, rather than the world building.  With that said, I think Phoebe’s tinkering of herbals is something we haven’t seen much of in steampunk.
TGE: Without going into spoilers, what kind of gadgets/devices can readers look forward to in the story?
CT: Of course, I had to have an airship and a sexy airship captain, but there are also aethergrams, portable information modules, steam coaches and a variety of other interesting gadgets. 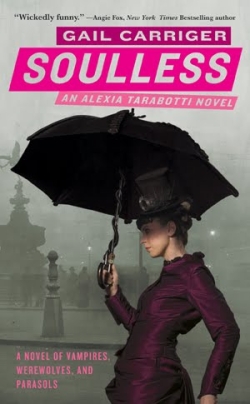 TGE: Please describe a few of your favorite steampunk/steampunk romance stories in books, film, and/or television.
CT: I think Gail Carriger has done a great job with her world building, and I’ve also enjoyed Girl Genius.  I love the recent Sherlock Holmes movies, though I wish they’d add more steampunk elements.  Though not steampunk, Elizabeth Peters and Anne Perry have been a big influence in my writing.
TGE: What else can readers look forward to from you?
CT: I just released the second book in the Viridis series, Devil on a Sparrow’s Wing.  Also, I have a paranormal romance based on Jack the Ripper, and a steampunk clothing craft book due out this spring.
TGE: Where can readers find you?
CT: I can be reached via my website, http://www.calistataylor.com , and my stories are available through most major ebook distributors (Amazon, Barnes & Noble, iTunes, Smashwords, etc.).
Ms. Taylor, thanks for your time, and for your art.
***
In related news, DEVIL ON A SPARROW'S WING, the second book in the Viridis series, is now available. Click here to read the blurb.

That's not all, my astute passengers: You can download a free ebook copy of VIRIDIS at Amazon.