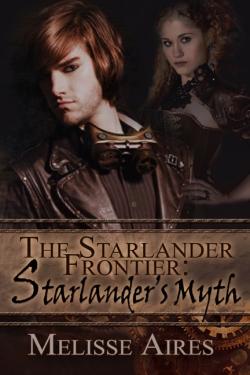 As if science fiction romance weren’t a small enough niche to begin with, we already have some character name drama brewing.

Back in May of 2011, my steampunk romance short story, “Steambot Rampage,” was released in L&L Dreamspell’s DREAMSPELL STEAMPUNK Anthology, Volume 1 (along with stories by Pauline Baird Jones, Chris Samson, and Linda Houle). The hero is named Jack and the heroine’s name is Sophie. Then, in November, author Melisse Aires had a new steampunk romance release called STARLANDER’S MYTH (Whiskey Creek Press's Torrid). And what did she name her hero and heroine?

So I’m like, what is going on here?! ;) How could two stories released within months of each other feature main characters with the same names? Is this a statistical anomaly or something? Is it possible that Melisse Aires and I were separated at birth?

I’m a fan of steampunk romance so naturally, I knew I had to not only read STARLANDER’S MYTH for pleasure, but also investigate what else is going on in that story. Would I find any other unexpected surprises? ;)

In “Steambot Rampage,” a no-nonsense secretary and an intrepid reporter join forces to battle a bizarre automaton on a rampage on the eve of the 1893 World’s Columbian Exposition.

STARLANDER’S MYTH is a steampunk space western about an asteroid miner who comes to the rescue of a woman with a secret heritage. The steampunk aesthetic of the setting infuses everything from clothing to equipment the way Joss Whedon’s FIREFLY was steeped in the American Old West.

Okay, so the premises and settings of the stories are completely different. But the hero and heroine have the same names! However will readers tell these two stories apart?! ;)

In STARLANDER’S MYTH, Jack is a war hero who has started a new life on Yonder Beltway 7 excavating a valuable resource known as “cryst.” As the story begins, he discovers a woman and her child are about to be sold into slavery. Sophie has a secret that must be concealed at all costs. The author’s Web site describes her as a “mythical creature” and in reading the story I learned which kind. Hmm, well, I guess that’s about as different from my story as steam engines are from peas.

Speaking of steam engines, what about the tech in STARLANDER’S MYTH? There are steampunk-style space ships, flyers, a couple of “brass and steel” automatons…

Wait a minute! My story has automaton, action, too! Er, it has one automaton, whose, um, pyramidal shape is nothing like the ones in STARLANDER’S MYTH. Jim and Bob, as Jack Starlander calls his helpers, can operate a space ship with aplomb. The one in “Steambot Rampage” can, uh, well, it goes on a wild rampage!

How does that compare with “Steambot Rampage”? Jack and Sophie have more of a friends-to-lovers thing happening, and it’s up to readers to imagine what goes on in their bedroom after the story ends.

Okay, so despite the character name similarity, I couldn’t find anything else that Melisse Aires’ STARLANDER’S MYTH had in common with “Steambot Rampage.” In fact, the story engrossed me to the point that while reading, I forgot all about the name issue. :P

I hope you’ll have fun going along for the ride, too!