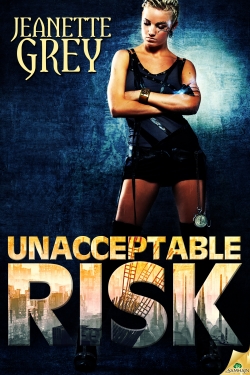 Lately I’ve been feeling as though I’m standing before one of those all-dessert buffets where I can gorge on delectable, sugar-spiked treats. That’s because I’ve had a lot of “punks” at my fingertips in the past few months: steampunk, biopunk, and, of course, cyberpunk.
The newest cyberpunk romance addition to the science fiction romance family is Jeanette Grey’s UNACCEPTABLE RISK, out now from Samhain Publishing. Congratulations on your release, Ms. Grey!
Here’s the story blurb:

She may learn to live for love…if vengeance doesn’t kill her first.
Plix spends her lonely, gritty life trying to solve the mysteries her father left behind. Armed with a variety of cybernetic enhancements and a talent for getting into places she shouldn’t be, she searches for clues to his murder—and who’s responsible for poisoning her city.

Waking up on a street corner with her brain wiring fried to a crisp, she figures she must have gotten close this time. There’s only one man she trusts to pull her back from the brink: a tuner who can retrieve the evidence hidden deep in the recesses of her mind. A man she dares not let too close to her heart.

When Edison downloads a secret SynDate schematic from Plix’s burnt-out circuitry, he knows with dreadful finality that nothing—not even the fiery kiss he’s been holding back for years—will stop her from pursuing her quest past the point of insanity.

All he can do, as he helps her plan her final mission, is ease her pain, watch her back…and hope one of them doesn’t pay with their lives.

***
Jeanette Grey recently launched a blog tour and her stop today is here at The Galaxy Express. In addition to participating in an interview, she has put aside a copy of UNACCEPTABLE RISK for one lucky Galaxy Express passenger! Details for the giveaway follow the interview.
Let’s jack in!
The Galaxy Express: Please tell us about yourself. Why did you decide to become a writer? What kind of stories are you known for?
Jeanette Grey: I'm a writer because I can't not be. I tried! I always have stories bubbling around in my head, and I constantly narrate what's going on as one would when telling a story.
That said, I decided to take the plunge and start trying to actually finish, edit and publish my writing when I was in a fairly dark place. I was stuck in a job I hated, isolated in a new town, and writing was the place I escaped to. My unhappiness at the time was the excuse I needed to finally motivate myself and commit to pursuing writing seriously.
I write a lot of different kinds of stories, but I think the common thread is the idea of love as a redemptive force. My characters are often lonely, damaged people, and it's through love and connection that they find happiness and healing.

TGE: Given that science fiction romance is a niche subgenre, you took a real, er, risk writing UNACCEPTABLE RISK. What motivated you to take that plunge?
JG: A few of my friends online had been talking about cyberpunk, and it's something that has always fascinated me. I think there's just such fertile ground for world-building in the near-future. Imagining what the world will be like fifty-odd years from now, assuming the current rate of technological development, environmental change and urbanization is just so interesting to me.
Shortly thereafter, the characters of Plix and Edison showed up in my head, and their story was simply too compelling not to tell. When Samhain agreed and decided to publish it, I couldn't resist sharing their story with the world.
TGE: Without spoilers, what kind of villain are Plix and Edison up against?
JG: They're fighting against a shadowy figure who's at the heart of a corporation that Plix holds responsible for willfully poisoning her city. Always acting in the background, pulling strings and manipulating people to his own agenda, he's a tricky one to pin down, but Plix is completely determined to gather the evidence she'll need to expose his corruption.
Unfortunately, he's aware of what she's doing and uses a terrifying array of weapons against her – ones that alter her consciousness and her memories, putting the very fiber of her personhood at risk.

TGE: What kind of cool tech does UNACCEPTABLE RISK feature?
JG: Cybernetic body modifications play a key role in the story. Edison is actually a tuner –someone who specializes in integrating technology into a person's body. He and Plix first met when she came to him for some implants that give her better fine motor skills in her hand. She also has an ocular implant that enhances her vision and allows her to record everything she sees and store it in the circuitry that's been wired into her brain – all crucial tools for gathering evidence against the baddies in her world.
TGE: What kind of heat level can readers expect from the story?
JG: The emphasis of this book is primarily on the relationship between Plix and Edison, and on their crusade to try to save the world. There is definitely some heat, but it's less central than it has been in most of my other stories.
TGE: If you had genius hacker skillz, what would you use them for?
JG: Oooh, so many good options. I'd like to think I'd use them much the way Plix does – to challenge people who I think are doing wrong in the world and to expose corruption and injustice.
Though I might just try to get myself free cupcakes.

TGE: Please name a few of your favorite cyberpunk stories.

JG: Just a few? Well, right at the moment, I'm a little obsessed with the Cybershock books that came out from Samhain earlier this year, especially Zero Factor by Stacey Gail. She did such an amazing job integrating technology and romance, and the fact that her psychic character's gift relied on touch and touch memory was a brilliant way to introduce a sensual element.
TGE: Where can readers find you?
JG: I just launched my new website at http://www.jeanettegrey.com/ and I'm on Twitter pretty regularly (http://twitter.com/#!/jeanettelgrey ). I have a Facebook page ( http://www.facebook.com/jeanettelgrey ).
TGE: What else can readers look forward to from you?
JG: Sadly, I don't have any solid release dates that I can share right now, but I'm currently finishing editing on a contemporary novel, and I have two SFR works in progress that I hope I'll be able to share next year.
Thanks so much for having me, and for putting the spotlight on science fiction romance.
Ms. Grey, thank you for your time, and for your art.
***

Now for the giveaway! Enter for a chance to win an e-copy of UNACCEPTABLE RISK by leaving a comment for this post. Available formats: PDF, Mobi, and Epub. The contest will be open until midnight EST on Tuesday, December 20, 2011.

Let’s make it even more fun: If you could visit any type of virtual world, where would you go?
Joyfully yours,
Heather
Posted by Heather Massey at 6:00 AM
Newer Post Older Post Home