An Interview With WARS OF THE HEART Author Inari Gray 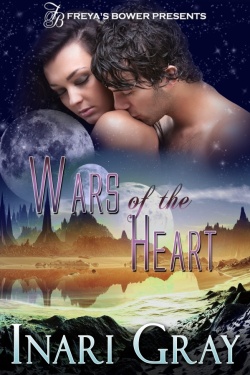 What better way to celebrate Valentine’s Day than with a new science fiction romance? Exactly! Today is the release day for Inari Gray’s WARS OF THE HEART (Freya’s Bower). And such an apt title!

To help celebrate the release and spread the news, Inari Gray came aboard for an interview so we could get the scoop on her book. But first, here’s the story blurb:

Someone has been tampering with Earth's Ozone Shield, and judging from the malfunction locations, Intergalactic Diplomat Katherine Morgan is convinced it's more than a mere technical glitch. Worried for the health and safety of her people, she petitions the Peace Keeping Intergalactic Council to conduct a full investigation and offer any kind of assistance Earth might need in the event of an ambush.

Unfortunately, the only assistance they can offer is in the mercy of the impetuous King of Salatiel, a man whose heart Katherine stomped on more than ten years ago.

The terms of the arrangement? Force an alliance, get Ja-el Lamar to yield at the threat of losing his kingdom. She didn't take into account how treacherous it would be, faced with everything she thought she no longer cared about, everything she left behind.

Meanwhile, Ja-el has an agenda of his own. He hates the Peace Keeping Intergalactic Council and everything it stands for. He's never trusted those in power there and he certainly won't start now. Especially not when they're sending Katherine Morgan in his direction. A woman he vowed to never see again. Whom they all know has the power to destroy him.

And now my interview with Inari Gray:
The Galaxy Express: Please tell us about yourself. Why did you decide to become a writer?
Inari Gray: I didn’t have much of a choice. Writing kind of chose me. While I’ve dabbled in this, that, and the other, I always come back to this. The stories in my head beg to be told. And when I ignore them, they team up, ninja style, to blindside me. Nothing ever quiets the voices quite like writing. I see a million possibilities in everything (which is a lovely, polite way of saying that I let my imagination run away with me), so writing is a natural progression of that.
TGE: Looking at the blurb, the WARS OF THE HEART seems like it has significant political elements. Is that an accurate assessment? Would you say the external plot is more politically-driven or action-adventure driven?
IG: Definitely more politically driven. Everyone has their own agenda and quite often nothing is what it seems. While there are a few exciting adventure elements, they derive from the political, so expect to try and piece together who wronged who, whose ultimate quest is power, and whose is revenge.
TGE: Finish this sentence: “WARS OF THE HEART is for readers who like…”
IG: … sexy alpha heroes, smart independent heroines, stories with political overtones, who-dunits, detailed world-building, charismatic side characters, and various humanoid alien species with interesting back stories.
TGE: Heroine Katherine Morgan is a diplomat. Discovering that made me realize I haven’t encountered many heroines like that. What kind of mad diplomacy skillz does she have?
IG: Katherine is everything a good diplomat should be. She’s intelligent, likeable, patient, and passionate. She runs things by the book, but isn’t afraid to forsake the rules if it’ll get her the outcome she wants. She has a good relationship with her colleagues but only trusts a select few, because she understands that everyone’s civility is the object of careful training and often hides what’s underneath.
She’s ambitious and fiercely loyal. She believes in the cause, but not blindly. She supports the system because she sees that while flawed, it’s the best option. So she works to improve it. I liked that about her. She isn’t naïve, she’s optimistic, even having seen that the system sometimes fails. She just genuinely wants to make their worlds better, to make their people better. I admire that.
TGE: What is Ja-el’s personality profile?
IG: Ja-el is a tortured, brooding alpha. He’s got a lot of baggage and his past experiences greatly shape his view on the world. Unlike Katherine who often tries to see the good, despite having seen the bad, Ja-el is not a man given to second chances. Once wronged, always wronged. He is fiercely protective of his inner circle, and seldom allows new people to get close. Most of his colleagues see an impetuous, immature king, and he rather enjoys that they view him this way because it allows them to underestimate him.
Ja-el sees the burgeoning power struggle clearer than anyone else. He knows it’s a careful game and that only a select few will survive.
TGE: Your publisher’s Web site describes the heat level as “Tangy.” What can readers expect from that?
IG: This story is not about a diplomat and King that fall in love. This is about a diplomat and King that WERE in love and are now forced together after that relationship broke apart. There are hurt feelings, misunderstandings, but worst than that, there’s the fear that things between them aren’t fully resolved. The tension is high. People’s lives are at stake and it’s never easy to put personal feelings to the side when working so close together.
So expect things to get intense. Emotionally, this story catches fire. And physically, well, you’ll just have to read and see. ;) 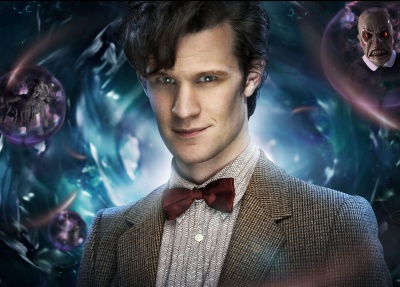 TGE: Please describe a few of your favorite science fiction romance books, films, and/or television shows.
IG: I’m a huge fan of the Star Wars saga. You might see some of that influence in the political aspects of WARS OF THE HEART. It’s one of my favorites aspects of episodes I-III, seeing the power shift and the government crumble.
But I have an especially soft spot for Doctor Who. I mean, I am awed and fascinated by the time traveling doctor and his many adventures. I love that even becoming the many people that he does, there’s always a current of anger and sadness that he tries so hard to hide behind that witty, over the top exterior. And despite all the losses he’s suffered, he still tries to do the right thing and fix the wrongs of the universe. I mean, he is just the ultimate in character building for me. And as you can tell, I’m madly in love with him. Ha ha
TGE: What else can readers look forward to from you?
IG: I definitely see myself going back into a space opera setting sometime in the future. For now, I’m doing some gritty urban Sci-Fi which will involve miraculous healings, some ‘invasion of the body snatcher’ type bad guys, and one really dark heroine detective who is more interested in getting answers than she is in following the law she’s supposed to uphold. :) After that, it’s wherever the space dust takes me.
***
Ms. Gray, congratulations on your release and thanks for your art!
Joyfully yours,
Heather
Posted by Heather Massey at 12:01 AM
Newer Post Older Post Home