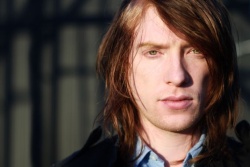 Reel Movie Nation posted an article about a forthcoming science fiction romance film starring Zooey Deschanel and Domhnall Gleeson. ABOUT TIME (2013) is described as a "quirky" story that "will be a combination of romance, science fiction, and comedy." Richard Curtis (FOUR WEDDINGS AND A FUNERAL) will direct. (Thanks to Melisse Aires (STARLANDER'S MYTH) for the link.)

The film will tell the story of Tim, a time traveler who tries to use his powers for good. Actor Domhnall Gleeson, best known for his work as Bill Weasley in the Harry Potter movies, will play the lead and Deschanel will be his love interest.

This sounds like a fun story and it's so cool that it's already being described as a science fiction romance!

I sure hope Deschanel's character is more than just a "love interest." My fingers are crossed that this heroine plays an integral part in the story and is right there by the hero's side to save the day.

After watching a few films lately that feature single-male protagonists, I realized I'm really primed to watch sci-fi romance films featuring a couple as the main "character." I love the idea of a couple tag-teaming the villain. I certainly have that experience in books, but seeing it on the big screen would be an immense validation of not only science fiction romance, but also the idea of community and teamwork that such a couple would represent.

I believe that using couples-in-love to create a fused hero dynamic in SFR/SF films could attract more viewers and interest in these genres, especially since most people know a few things about relationships, romance, and falling in love. What do you think?