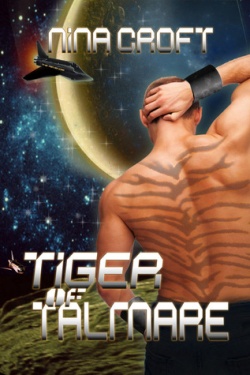 I recently finished Nina Croft’s sci-fi romance TIGER OF TALMARE. One of the significant encounters the heroine (a space pirate) has with the hero early in the story is when she has to rescue him from a damaged cryogenic pod. The hero is naked and, of course, amazingly hot. The hero is her prisoner. She’s attracted to him and subsequently engages in a detailed inventory of his alluring body.

That reading experience triggered memories of other science fiction romances that feature this trope, all of which occur early in the stories:

SLAVE (Cheryl Brooks): Heroine (a traveler on a quest to find her sister) first encounters the naked, exotic, chained hero at a slave auction.

FORBIDDEN LOVE (Kaye Manro): Heroine (a scientist) studies naked, unconscious, exotic alien hero in an examination room after he’s been in a crash.

All of the above stories have a context for the naked hero and all of them are quite different. What they have in common is that they all give the heroines an opportunity to study the heroes’ bodies at close range. The scenes represent an objectification of the male body, and are done in such a way as to give not only the heroines control over that first sexual encounter, but also readers by virtue of a fantasy.

A naked hero is a vulnerable one. When unconscious or imprisoned, the heroine can touch him as much as she wishes, often with very little concern about her safety. This places the heroine squarely in charge of initiating sexual contact.

I’m torn by these types of scenes. On the one hand, they are valid fantasies and I can understand how they’d be empowering for many female readers. Romances are places where women can safely explore sexuality and indulge in their fantasies. On the other hand, the extreme objectification sometimes interferes with the flow of the story for me because a) I’m being invited to drop the plot and ogle the hero, and b) he doesn’t usually give consent to the heroine. Plus, if the story is set in a technologically advanced future, the nakedness somehow sticks out more and begs further questions. 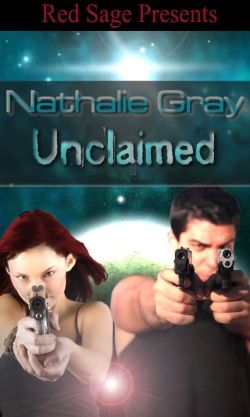 When reading that scene in UNCLAIMED, I wasn’t thinking, “Hey! Why isn’t he naked?” If he had been, I’d have wanted to know not only why, but who was going to supply him with clothing upon his release. In my mind, this is the skiffy side wanting to be in balance with the romance side.

So generally, I would prefer for there to be a very plausible reason for a hero to be nude. Ideally, his nakedness would tie into the worldbuilding and not exist just for the sake of titillation. I mean, why not accomplish both?

Then my thoughts started going in another direction. What about the subverted form of that trope? Would we object to a hero who caresses and actively studies an unconscious, naked heroine?

If I recall correctly, in my reading I haven’t come across a similar type of objectification with naked heroines. In other words, scenes wherein the heterosexual hero encounters a heterosexual, naked heroine and studies her (visually and/or physically) from head to toe. Does anyone know of a science fiction romance where this type of scene occurs?

I understand why a hero examining a naked heroine isn’t done regularly. The specter of sexual attacks against women over the ages looms large. Still, I can’t help but wonder if science fiction romance authors have the freedom to subvert the naked hero trope and extract something positive from it.

In a non-romantic SF story, I would be on guard for any misogynistic objectification of a naked female character. But in romance, I feel that I’m reasonably safe expecting a progressive hero, one who can appreciate the heroine’s body in a non-lurid and non-violent way—assuming, of course, that the story called for such a scene.

What about you? Where do your tastes fall on this naked hero/naked heroine spectrum? Are there any naked hero titles you'd like to add to this list?