While reading about the Smutketeers, a multi-author blog, in the January, 2012, issue of RT Book Reviews (Click here for part one on Rachel Grace’s GEARED FOR PLEASURE), I discovered that author Eden Bradley was working on a sizzling steampunk romance called THE DREAMBOX GIRL.
I was so taken with the title that I contacted the author to learn more information. Subsequently, the author kindly wrote a guest post so we could learn more about her interest in the world of steampunk as well as a glimpse behind the scenes of THE DREAMBOX GIRL, which is currently in progress. Read on to learn about this intriguing project:
Steampunk
By Eden Bradley
Steampunk is a varied genre—so varied that it can be hard to pin down the many sub-genres authors are writing about. In fact, I’ll be presenting a workshop about this very complex subject at this years’ RT Booklover’s Convention with fellow authors Rachel Grace (aka R.G. Alexander), Suzanne Lazear and Kady Cross (aka Kathryn Smith). Among our list of sub-genres are: ‘Classic’ pseudo-Victorian steampunk, Cyberpunk, Oilpunk, Deiselpunk, Gasolinepunk, Clockpunk, Nanopunk, Sailpunk, Decopunk and even Candlepunk and Sandlepunk!
Basically, the ‘steam’ aspect of the steampunk genres has to do with the technology available in the Victorian era as we know it: steam, clockwork gears, etc., as well as Victorian styles of dress, machinery décor and architecture. Mix these details with fantastical airships and submarines, tesla coils and unheard of weaponry, and you have steampunk as it was originally known. The subgenres come into play when these elements are combined with other worlds, eras and technologies. Well-known examples of ‘classic’ steampunk are H.G. Wells’s Time Machine and the 1960’s television show Wild, Wild West. You’ll see many examples of film branching out into the sub-genres. As a small sampling are Bladerunner, (one of my favorite movies of all time) which is Biopunk mixed with Cyberpunk, the charming animated film Howl’s Moving Castle is a good example of Oilpunk, and the film Dark City is an excellent example of Decopunk. 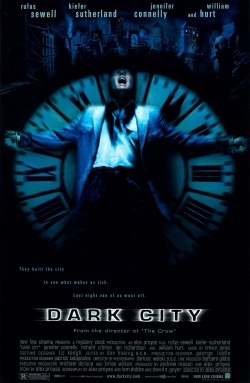 When the ideas for my upcoming steampunk mélange series, Kyoto City Steam, came into my head the first book began as true Cyberpunk. Then the details of THE DREAMBOX GIRL and the second book in the series, THE CELADON GIRL, took a strange turn. This series wanted to be set in a pseudo Victorian-era Japan, in some alternate version of our own earth history. I say ‘wanted’ because my stories and characters often dictate these kinds of details to me and I am truly helpless to argue about it. At that point a great deal of research began. I needed to know the history of Victorian-era Japan—particularly Japan’s relationship with the Western world— then I had to decide how that history needed to be altered to accommodate my world. I studied the Kyoto tea houses, the geisha culture, formal tea ceremony, when locomotives came to Japan, where trading ships docked, the history of the Yakuza (the Japanese mob), the effects of laudanum…As you can see it’s very easy to get lost in research-fascinating stuff! But at some point I must write the book.
Luckily when you’re creating your own world you get to make up the rules, but it still must make sense to the reader. Even in an alternate universe the characters must still be relatable, and the reader must be able to suspend their disbelief in order to immerse themselves in the story. I think the research helps an author to do this, but it’s also crucial that your world have consistency, that the fantastical elements and technologies make some kind of sense within the setting. Putting it all together in a multi-genre steampunk book can be like building a delicate puzzle, where every piece must be most carefully placed and fit exactly or the world—and the story—will fall apart. I am, theoretically, sitting here with a pair of tweezers and my magnifying glass, putting the Kyoto City Steam series together one piece at a time.
Meanwhile, I was looking for a cover artist. Having custom cover art done can be difficult in the steampunk genres. The artist has to really ‘get’ steampunk. I was thrilled when I found my artist on the Deviant Art website. He goes by Caz in the Machine, and he’s absolutely brilliant! He altered the original image I found on his gallery to suit my book (luckily he loved my ideas and was willing to do the manipulations to his image-he doesn’t normally do commercial work). My boyfriend and I then added the text and the cherry blossoms to give some hint of Japan, and I’m in love with the result! 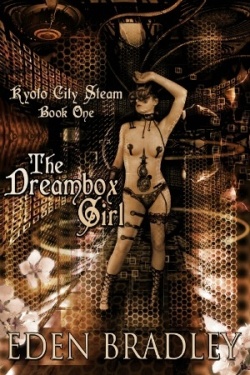 THE DREAMBOX GIRL, Book One in the Kyoto City Steam Series
Coming from Eden Bradley in 2012
Cyberpunk Japan meets Wild West in this sensual tale of the forbidden.
* * *
She lives in a prison of sensual dreams, until one man changes her dreams forever…


The Dreambox Girls exist to pleasure the elite of Kyoto City. Miss Kittee, the starring attraction, lives in a world where her sensual fantasies are shared and controlled by the Kin’ai Coil…for a price. Owned by the Bakuto who run the City, she knows no other life, never considers escape…until one man joins her in her dreams and changes everything.
Taro Jukodo is invited to the Brass Blossom, the most infamous tea house in Tea Town. Offered the opportunity to experience the pleasures only the most powerful have known, how can he refuse? Having the chance to know the woman inside the Dreambox, to show her what they could have together…How can he resist?
Together they discover the forbidden. Will the danger be worth the risk?
* * *
And yes, again, at some point I must write the story. I’ve started THE DREAMBOX GIRL, but I keep getting distracted by developing THE CELADON GIRL, and Book Three, THE SHUNGA THIEF. I’m also distracted by meeting deadlines on already-contracted books, so I’m afraid the first book in the series won’t be available until this summer at the soonest. I plan to self-publish this series—I’m too in love with these stories to give up control to a publisher.
Meanwhile, news about the Kyoto City Steam series can be found on my website, and on my group blog, the Smutketeers (www.Smutketeers.com) with authors Rachel Grace/R.G. Alexander, Crystal Jordan and Karen Erickson, if you enjoy a bit of the naughty along with your steampunk. You can also see our steampunk photo shoots there, and jump from the blog to our chatty Yahoo group.
I hope you’ll also visit my website: www.EdenBradley.com to read more about THE DREAMBOX GIRL, as well as my other books.
Posted by Heather Massey at 4:00 PM
Newer Post Older Post Home