Who's Your Space Pirate Daddy? 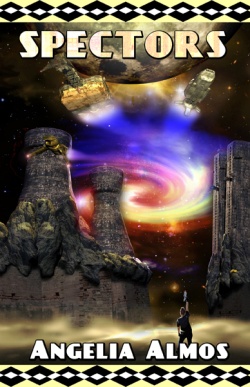 An author I was chatting with via email alerted me to a possible science fiction romance, namely, SPECTORS by Angelia Almos. And squee, the main character is a space pirate heroine!

I downloaded a Kindle sample and will check it out. Naturally, I'm excited about the existence of another space pirate heroine. They are one of my favorite character types but unfortunately very rare. However, what struck me the most about SPECTORS was a particular element in the blurb:

Space pirate Kristy Ryan is having a bad day.

First, her pilot and lover, Andrew Bennet, picks a fight with her.

Second, the Military Space Alliance comes across her ship when she’s running a not-so-legal job.

Third, she finds out her father, a notorious space pirate himself, disappeared while working for the MSA.

Fourth, and the final straw, the MSA is blackmailing her to continue the dangerous mission her father started.

What else could go wrong?


That element is “her father, a notorious space pirate himself.” Upon reading that line, I was like, stop the press! Where have I seen that dynamic before? Oh yeah, in the sci-fi romances featuring space pirate heroines, namely:

All of the heroines in the above books, including SPECTORS, have fathers who are space pirates! I know that’s only five books, but in a niche subgenre like SFR this kind of statistic stands out in sharp relief.

It also made me wonder why my heroine-space-pirate sci-fi romance, ONCE UPON A TIME IN SPACE, is an outlier. Raquel’s dad is a political activist. It never even occurred to me to make him a space pirate.

So now I’m very curious to discover the occupation of the next father I encounter in an SFR with a space pirate heroine. There must be something powerful about the space pirate father-space pirate daughter dynamic for it to have made an appearance this many times.

What do you think is at the root of this dynamic? I am going to start keeping tabs on it!