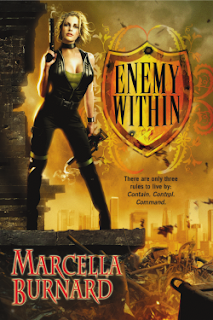 RT Book Reviews has a jazzy article in the June 2012 issue called “Lady Killers.” It’s about “deadly heroines” and lists a number of “fictional tough girls” along with “the reasons we love them.”

Heck, yeah—I’m all over that like a fly on honey.

Naturally, I scanned the list for science fiction romance heroines because this subgenre has its share of “deadly heroines.” The first on the list, Eve Dallas from J.D. Robb’s In Death series is more of a suspense heroine than sci-fi, but then at the bottom of the description it says “Try: Capt. Ari Idylle from Marcella Burnard’s Enemy Within.”

That list got me thinking about other science fiction romance heroines who fall into the tough-girl category—particularly women who edge into anti-heroine territory. If this kind of heroine is up your alley, here are a few other choices you can check out:

Do you have any other suggestions? 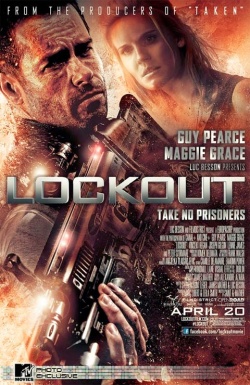 A man wrongly convicted of conspiracy to commit espionage against the U.S. is offered his freedom if he can rescue the president's daughter from an outer space prison taken over by violent inmates.

According to this review, there is a romantic subplot in the story. Unfortunately, this film is not being favorably received so far, but not necessarily because of the romance. While I'm happy that the poster features both the hero and heroine—thus tipping off viewers about the potential romance—the image itself is rather lackluster. And the heroine seems too much like a damsel-in-distress. Wahh.

Still, the film has elements I like—prisoners-in-space, action-adventure, romance, Guy Pearce—so I’m definitely going to check it out when it’s available on DVD. But I’m going to set my expectations to “low.”