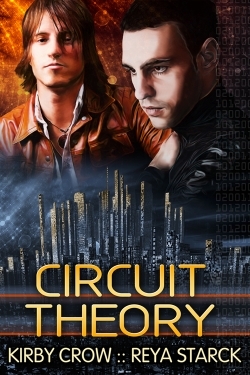 I’ve been tapped to make a post on the topic of the status of virtual reality lovers in the gay romance genre, which I’ve heard rumored isn’t a popular theme.

To be honest, I’m not certain that it’s not popular. I know that it isn’t being written, but scifi overall isn’t the most popular genre among the writers of gay romance. There’s relatively little of it compared to other romance sub-categories, but that doesn’t mean that the readers for it aren’t out there. I don’t think there have been any target studies in our demographic, but I believe that all we truly know so far is that the pool of gay scifi is limited.

That might be because there are misconceptions about what defines a science fiction story, or it could be because authors tend to have a weather eye trained on what publishers are looking for before they sit down at the keyboard. Either way, we can agree that, while it’s not virgin territory, science fiction itself could certainly use a little more exploration in gay romance.

At The End of My Golden Road, It’s All About The Journey (Donna):

We got a chance to be up close and personal with these giants of the field of romance publishing and to ask them the questions that really mattered. So when Kevan Lyon, with whom I had a pitch session on Friday, said that she really didn’t care much for science fiction romance, I had the opportunity to approach her personally during the break. Was I wasting her time and mine to pitch her with my SF suspense romances, even though they had both finaled in the Golden Heart?

Well, no, she said. Maybe you’ll be the one to change my mind.

I pitched her on Friday and got a partial request. It remains to be seen whether I can change her mind.


I had a number of happy meet-ups including a very enjoyable first face-to-face with my agent, Amanda Luedeke (we talked and laughed for hours!), with my Fabulous Firebirds co-finalists that even included an impromptu tattoo party (not as painful as it sounds--we branded ourselves with temporary Firebird tattoos), and various get-togethers with the Firebirds, Starcatchers, members of the SFR Brigade, and fun-to-run-into-you's with members of my longtime critique site, CritiqueCircle, Dixie Lee Taylor and Lorensj.

And of course, it was fantastic to final in the Golden Heart with Donna this year, and have Sharon fly in for the Saturday Awards Ceremony. The Spacefreighters Lounge crew together again. We were just missing Pippa!

“The Watchmaker’s Lady” by Heather Massey is RT’s Elisa's suggestion. She fought for this book to win a spot on the list because it was so far off the beaten path but remained “delightfully unusual” in the steamiest of sense.

Thanks for remembering sci-fi romance, RT!