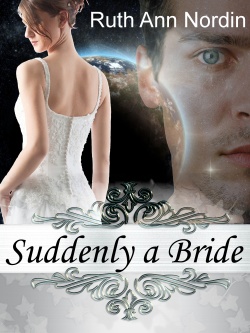 When I received a heads up a few months ago from a fellow blogger about Ruth Ann Nordin’s SUDDENLY A BRIDE being available for free at Amazon (Kindle edition), I grabbed it, especially in light of the fact that the story blurb reminded me of the post at Smart Girls Love Sci-Fi and Paranormal Romance on science fiction romances that feature the “Mars Needs Women” trope (see also my previous commentary on the topic (scroll down)):

Rilo An comes from a world where there are no women, and what he longs for is a life mate: someone who will complete him, someone he can love who’ll love him back, someone who’ll ease the aching loneliness that haunts his life.

So he leaves his world, takes on the Earth name Chris West, and makes a payment to Star Systems Unlimited for a life mate. When he bonds with her, he thinks life can’t get any better.  Except she was married before, and memories of her deceased husband still linger around her home.  Will he find a place in her heart or will he have to become like her first husband in order to get her love?


I thought it might be fun to sample a “Mars Needs Women” story, because hey, you never know, and the free price tag increased incentive.


For some reason, the author lists SUDDENLY A BRIDE under the “Contemporaries” section of her Chronological Order of My Books page. It has all the hallmarks of a sci-fi romance to me, although she does tag it with “a twist of sci-fi” in her general books section.

Based on my reading of the first third, I think there’s more than a “twist” however. Allow me to explain (minor spoilers ahead).

The tone of this story is very earnest. So earnest, in fact, that it’s impossible to miss the heavily emphasized social commentary/subtext regarding monogamy, procreation, and heteronormative relationships. In a nutshell, all are on a pedestal of extreme proportions.

When the hero (from the planet Pandoran) and heroine (from Earth, natch) consummate their relationship very early on in the story (and in their romance), the heroine is under the influence of a powerful sex hormone that the hero knowingly emits. Said heroine is unaware that she’s being influenced in such a way. The hero had previously taken medication to suppress his sexual and procreation urges, but now that he’s on the hunt for a life mate, it’s not necessary. Erm…okaaaay.

I’m a fan of uninhibited sex fantasies in SFR, but my experience of SUDDENLY A BRIDE so far made me realize that execution of said fantasy makes a monumentally significant difference in terms of my ability to engage with it.

And the heroine's name is Caitlyn, by the way. I'm disheartened that her name apparently wasn't deemed important enough to be mentioned in the blurb.

Also, the idea that an alien corporation—“Star Systems Unlimited”—with the power to play interstellar matchmaker so the men on a female-less planet can find chicks to go all the way feels incredibly patriarchal and misogynistic to me. And the reason why Chris’s planet lacks women is even more chilling (as he explains to the heroine):

“…There was a time on my planet where men and women married and had children, like you do here. Then some people decided to make babies in labs. At first, it was an experiment to see if it was possible, but then the women decided it was better to have children that way instead of going through pregnancy and childbirth.

“Needless to say, that left men out of the equation. Women no longer wanted to marry us and have our children. Over the course of two centuries, men developed the ability to entice women to bond with them…the first time we have sex, we establish a life bond…This was why women didn’t want to have sex with us. They knew as soon as they did, they’d be trapped and have to go through pregnancy and childbirth.

“But it was more than avoiding physically having a child…with genetic manipulation, they were able to make perfect children…In response, men realized that they were unable to pass on their genes to the next generation. So they developed the ability to emit a sex hormone to make the female of his choice have sex with him, and that established a life bond that led to children.”

So, hmm, let’s see, the women were smart and figured out a way to avoid the dangers and inconveniences of childbirth. As a result, the men felt threatened and in retaliation worked up a scientific sex hormone leash to keep those uppity women under control. Eventually, as the hero explains further, these events led to a battle of the sexes. The women tried to defeat the sex hormone but in so doing rendered themselves unable to conceive female children.

To me, the implied subtext of the above passage was that sex outside of marriage in that culture is wrong. And what the hero doesn't say speaks volumes: Women circumvented childbirth, but they stopped having sex with the men, too? No wonder I shuddered while reading the consummation scene—it was payback time. Chris was the weapon and Caitlyn was his target.

Then later, Chris has this “enlightening” bit of introspection:

He didn’t know why women on his planet suddenly decided they didn’t want to bear children anymore, but their role had been a crucial one. Maybe the men had taken it for granted. He wouldn’t.

There was such a missed opportunity here to show the story implied in that last passage. I would actually be interested in reading a “Mars Needs Women” story wherein the men took women for granted and paid for it with near-extinction. Then the romance could focus on one hero’s attempt to redeem the males of his species (without any kind of heavy-handed seduction).

Unfortunately, SUDDENLY A BRIDE isn’t that story based on what I’ve read so far. Much of my conclusion has to do with Chris’s character having an unsettling dichotomy. While he seems to worship the heroine and is committed to a long-term relationship with single-minded focus, his behavior indicates that he lacks the intent/ability to overcome the sins of his fathers. I guess that version is too much to expect anyway since the story insists that the threats of extinction are the fault of Pandoran’s women. “Pandoran”—get it? Le heavy sigh.

Will the “Mars Needs Women” trope ever become progressive/subversive enough for my tastes? Only time, and more sci-fi romances, will tell.