[In the interest of full disclosure, I, Heather Massey, run this blog and I’m also the author of IRON GUNS, BLAZING HEARTS] 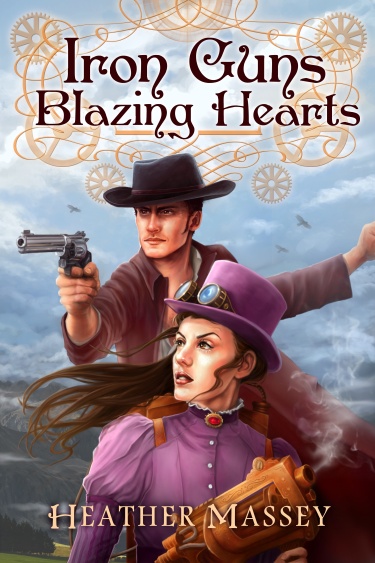 I’ve blogged many times about science fiction romance covers from a variety of angles. As a community, we’ve explored not only the obstacles facing SFR covers, but also the potential for creating quality ones that represent this subgenre effectively.

So when I had a chance to put my money where my mouth is, I decided that now was the time to act.

I contracted IRON GUNS, BLAZING HEARTS, a Western steampunk romance, with Lyrical Press in March 2012. Once I learned that there’d be lots of lead time prior to the release date, I began thinking about how to offer readers an entertaining and visually stimulating cover that places them right in the middle of the action.

My story has strong action-adventure elements and ideally the cover would reflect that (and serve double duty as a tag for readers). Plus, I was smitten with the cover of Angelia Sparrow’s SKY RAT. I knew that style would be a great fit for Iron Guns.

Therefore, I came up with a plan and pitched the idea to my publisher.


I can’t even begin to describe how momentous it is that Lyrical Press had the guts to embark on this risk-taking journey with me. The willingness of Lyrical’s team to try something new was especially significant given that *quality* digitally illustrated covers are a rarity for ebooks.

I decided to shoulder this risk as an author because 1) I love science fiction romance and want it to succeed 2) I have a predilection for risk-taking and experimentation, and 3) the timing was right.

The awesomesauce artist who executed the cover is Christine Griffin. It was such a pleasure to work with her and I gained fascinating insights into the process of digitally illustrated covers. The experience of seeing the artist bring the subgenre, setting, and characters come to life was amazing.

Much work went into the cover for IRON GUNS, BLAZING HEARTS. Here’s a taste of the behind-the-scenes action:

* Strategy: “What kind of image would create a visually appealing experience for customers visiting the Lyrical press Web site?” is the question that this cover had to answer, and answer well.

*  Development: There were many details to consider, such as color scheme, composition, fonts, and genre choices (i.e., creating a successful blend of romance, steampun, and Western elements).

* Collaboration: there was a whole lot of collaboration between Ms. Griffin, the Lyrical team, and me.

* Cover design: I depended on Ms. Griffin to deliver the artistic know-how, but designing the cover involved significant creative direction on my part. And by direction I also mean knowing when to listen, incorporate feedback, and adapt in the presence of new information. As marketing tools, covers serve several different needs—and the needs of different parties—simultaneously.

*  Time: The process from initial concept to completion took over four months.

So now that you’ve seen the cover, here’s the unofficial blurb for IRON GUNS, BLAZING HEARTS:

A woman on a mission…
The year is 1875. Violet Whitcomb is the hardworking assistant of her scientist father. But even his greatest invention, the world’s most advanced automaton, can’t compensate for the adventure and love she craves. Her only excitement comes from her favorite penny dreadful, The Lady’s Fireside Collection.
But all of that changes during a fateful trip through the wild American frontier. A villain known as the Iron Scorpion kidnaps Violet’s father to further his plan of world domination.
A man with a secret…
Violet convinces Logan McCoy, an irresistibly dangerous gunman, to join her rescue mission. Their attraction to one another is undeniable, and Violet is convinced Logan is the man of her dreams. However, their alliance turns contentious when she insists on including a third partner on the mission: Arthur the automaton.
What will be the outcome of this perilous quest? Will Violet and Logan ever find true love? What is Logan’s deep, dark secret? Discover the Thrilling and Explosive answers to these questions and more in Iron Guns, Blazing Hearts!

Thanks for reading! Now, you tell me: what are your thoughts about digitally illustrated covers for sci-fi romance—and/or this one in particular? Would you like to see more or is the current style of covers serving this subgenre well?