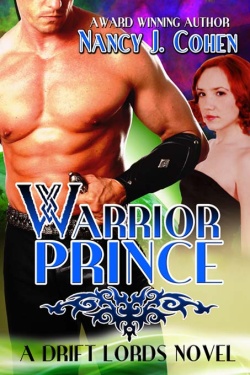 Author Nancy J. Cohen is here to celebrate the release of her latest science fiction romance, WARRIOR PRINCE, with an interview and giveaway! The story’s high concept premise mixes Bermuda Triangle action with an alien invasion. Frankly, neither of those concepts ever gets old so it’s lovely to have a story in this subgenre that includes them both.

Following my interview with Nancy J. Cohen are the details of the giveaway. But first, here’s the story blurb:

Warrior Prince: Book One in the Drift Lords Series

When mythologist and Florida resident Nira Larsen accepts a job as tour guide for a mysterious stranger, she's drawn into a nightmare reality where ancient myths come alive and legendary evils seek to destroy her. To survive, she must awaken her dormant powers, but the only person who can help is the man whose touch inflames her passion.

After a dimensional rift in the Bermuda Triangle cracks open and an ancient enemy invades Earth, Zohar—leader of the galactic warriors known as the Drift Lords—summons his troops. He doesn't count on a redheaded spitfire getting in his way and capturing his heart. Nira has the power to defeat the enemy and to enslave Zohar's soul. Can he trust her enough to accomplish his mission, or will she lure him to his doom?


View the WARRIOR PRINCE Book Trailer then read an excerpt.

The Galaxy Express: What is it about science fiction romance that appeals to you as an author?


Nancy J. Cohen: I love the idea of sentient life on other planets, spaceships that can travel to the stars, strong female story leads, and rationale explanations for aspects of world building. These factors add spice to a romance novel and elevate it beyond the ordinary. SFR stories can have adventure, intrigue, and danger. Complex plots are acceptable. There aren’t any boundaries with this genre. And after writing mysteries for so many years—stories grounded in reality—I yearn for the freedom to write wild adventure tales. Writing SFR satisfies this need.

TGE: How did the idea for WARRIOR PRINCE come about?

NJC: The idea for my Drift Lords series arose from a visit to Disney’s Epcot theme park. The Maelstrom ride is located in the Norway pavilion. Guests board a boat that sails into a dark tunnel where you rise up a steep incline. Staring down at you from the top is a glowing eye. At the summit, the vessel sails into a misty forest where trolls appear. These evil creatures cast a magic spell on you to “Disappear…disappear.” Suddenly, your boat is whisked backward, allegedly through time into the early days of Norwegian history.

I loved the trolls. From this experience was born my fictional universe featuring a band of warriors who come from outer space to save Earth from an invasion of evil Trolleks (my version of trolls). The enemy has invaded through a crack in the Bermuda Triangle, a rift between dimensions. But the Drift Lords cannot repel this invasion force on their own. According to prophecy, they must join with a select group of Earth women whose special powers are needed to defeat the enemy.

The action in Warrior Prince starts in modern day Florida when mythologist Nira Larsen goes hunting for a summer job at a theme park in Orlando called Drift World. Her employment interview turns into a nightmare when a Trollek attacks her. Coming to the rescue is the Drift Lord leader and his squad of hunky warriors. And so the adventure begins.

TGE: What kind of core fantasy can readers expect from this story?

NJC: The Drift Lords series is based on Norse mythology. Ragnarok—the end of times—is coming again. In the past, the gods were defeated at this great battle that brought destruction to the nine realms. Now the sons of Thor and the daughters of Odin must join together to prevent the coming darkness.

These descendants are our heroes and heroines. Warrior Prince takes place in contemporary times with elements of myth, magic, intrigue, and romance.

The science fiction component comes into play with an explanation of the dimensional rifts but also in that the heroes are space-faring warriors. Zohar, the Drift Lord leader, is beset by political opponents. In the midst of problems on Earth, he has to make a trip to his home world to quell a pack of dissidents. Zohar isn’t only the captain of the League of Drift Lords. He’s also the crown prince of the Star Empire, but he hasn’t yet stepped up to claim the throne for reasons given in the story.


Underlying Earth’s tectonic plates are dimensional plates on a cosmic energy level. This grid intersects at twelve distinct geographic points known as Vile Vortices. The Bermuda Triangle represents one of these sites, where electromagnetic anomalies may occur. As the plates grind against each other and pressure builds up, a rift between dimensions results. The rifts close naturally when cors particles, produced at the event horizon, reach critical mass.

However, the Trolleks have learned how to force the rifts open from their side of the portal. As the cors particles amass and the rift doesn’t shut, dimensional drift occurs. Eventually this widening drift will cause a massive energy wave, destroying the multiverse. The Drift Lords must send the Trolleks back where they belong and seal the rifts before this catastrophe occurs. The heroes and heroines must work together to achieve success and fulfill the prophecy.

TGE: If the hero, Zohar, was going to eat Earth food for the first time, which type would he sample first and why?

NJC: Zohar has a fondness for chocolate chip cookies. Otherwise, he likes chicken. It tastes like pamadore on his home world.

TGE: Name a science fiction romance other than your own that you’d recommend to a reader new to this subgenre.

NJC: Read anything by Susan Grant or Linnea Sinclair. They’re my favorite authors in this genre, among many others. 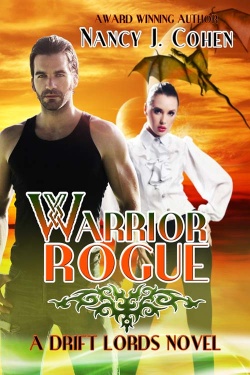 Warrior Rogue, Book Two in the Drift Lords series, comes next and is already in the pipeline. The third title is Warrior Lord. I’m also working on my eleventh Bad Hair Day mystery, so there will be more stories featuring my amateur sleuth, hairstylist Marla Shore.

Now for some contest fun!

Everyone who comments during Nancy J. Cohen’s blog tour will be entered into a drawing for a Warrior Prince tee shirt and magnet and a PDF copy of Warrior Prince. Click here for a complete schedule of her tour stops.

The winner will be announced on October 31, 2012 at the author’s blog and contest page.

Nancy J. Cohen is a multi-published author who writes romance and mysteries. Her popular Bad Hair Day mystery series features hairdresser Marla Shore, who solves crimes with wit and style under the sultry Florida sun. Several of these titles have made the IMBA bestseller list, while Nancy’s imaginative sci-fi/paranormal romances have garnered rave reviews and a HOLT Medallion Award. Active in the writing community and a featured speaker at libraries and conferences, Nancy is listed in Contemporary Authors, Poets & Writers, and Who’s Who in U.S. Writers, Editors, & Poets.