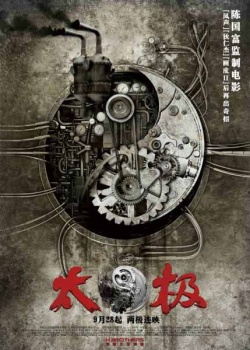 After seeing Stephen Chow’s extraordinary film SHAOLIN SOCCER (2001) (view the lame American trailer here), I thought, “I’d love to see something similar, but with steampunk.” And now I’ve got my wish! (It only took a decade, but who's counting?)

In legendary Chen Village, everyone is a martial arts master, and uses a powerful form of Tai Chi in all aspects of their life. Yang has arrived to try and learn it, only to find that it’s forbidden for the villagers to teach their secret style to an outsider. But when a mysterious man comes to town with a frightening steam-powered machine and plans to build a railroad through a village, the villagers realize they may have no choice but to put their faith in Yang, who has a secret power of his own. With action directed by the legendary Sammo Hung (Ip Man 1 & 2), Tai Chi 0 is a full-on steampunk kung-fu throw down that will knock you out of your seat.

With Sammo Hung involved, this is going to be fun. Check out the trailer:

I know. TAI CHI 0 is a martial arts film, and so chances are the romance is more of an afterthought, but this is Kung Fu mashed up with steampunk, baby! All I can say is, it’s about time!

Will a new sci-fi romance live action short film be coming soon to a film festival/theater/DVD near you? If we're lucky! I found this intriguing Tweet by actress Mylène Tissi:

According to her Web site, FIRST/LAST is “A sci-fi movie embedded with romance and drama shot by night in London. Currently in post-production.”

I sent an email to Ms. Tissi and if I can learn more about this project I’ll report back. 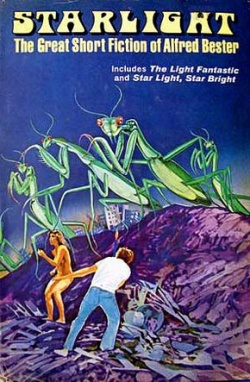 "Bonnie and Clyde in Space"? According to The Film Stage, Director Rupert Sanders (SNOW WHITE AND THE HUNTSMAN) is in talks about helming a science fiction romance film:

Deadline now has another to add to the pile, as they report Sony Pictures and New Regency are talking with Sanders for an upcoming science-fiction romance story The Juliet. The Believer scribe Henry Bean adapted Alfred Bester‘s original short story, which is set in the near future, but unfortunately no other details are available on what the feature adaptation holds.

If the source is to be believed, this could actually, and finally, be Sanders next project, as production is looking to kick off this spring.

Well, intrepid SFR fan that I am, I found more details in a post at FirstShowing.net:


Deadline reports he's directing The Juliet next, an adaptation of Alfred Bester's sci-fi short story Fondly Fahrenheit about a playboy and an android who join to become one murderous personality. It's also being described as "Bonnie and Clyde in space."

ComingSoon points to an interview with I Am Entertainment in which Beddor describes the plot of The Juliet in a bit more detail. "It’s lovers on the run in space, so think Bonnie and Clyde in space, but with a very unique Bonnie who has a secret. The tone of it is close to the Bourne Identity franchise."

It's interesting that sites are picking up on the "lovers on the run in space" theme because sci-fi romance couples are frequently on the run from somebody, usually a villain. I'd sure love to see one of those stories get the big screen treatment. If THE JULIET is made and is successful, maybe it'll help pave the way for more SFR films.

Hmm, I wonder if THE JULIET will have a tragic ending or an HEA? Any guesses? Preferences?