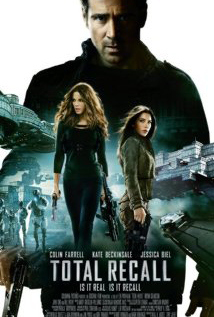 On Sunday, I blogged about Jac Shaeffer's TiMER: A Sci-Fi Romance Film With An Identity Crisis. This is one of the few SFRs directed by a woman. I had mixed reactions to the film, but am glad I saw it.

Charlee of Smart Girls Love SciFi & Paranormal Romance compared the 1990 film version of TOTAL RECALL with its 2012 remake starring Colin Ferrell. She notes that "Furthermore, I’m a romance junkie these days and the romance is much better told in the new version."

At Spacefreighters Lounge, Laurie A. Green blogged about how much she enjoyed OBLIVION (2013). (The post includes very mild spoilers, but beware major spoilers in the comment section.) Laurie reports that "This high budget, well advertised flick is, indeed, a Science Fiction Romance of epic scale. And with only the kind of mind-bending finale that a SFR can deliver."


Speaking of OBLIVION, I was invited to join SF Signal's 4/24 Mind Meld, which is about the 2013 SF films participants are looking forward to seeing. I'll be discussing a few SFR films, but oddly enough, the one 2013 film I'm looking forward to the most has nothing to do with science fiction or romance (I have a good reason, I swear!)

And on Thursday I'll be blogging about another recent SFR film I saw--one I totally adored. The ending made me so happy I burst into tears. Stay tuned!