TiMER: A Sci-Fi Romance Film With An Identity Crisis 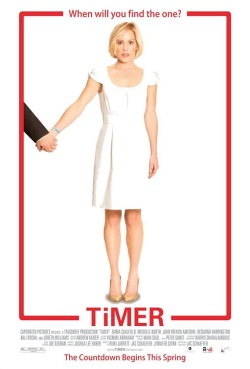 After my recent guest post at SF Signal about women directing science fiction romance movies, an editor by the name of Peter Samet alerted me via Twitter that he'd edited a science fiction romance film by the name of TiMER (2009). And that a woman had directed it. Color me intrigued! It was available on Netflix so I was able to watch it immediately.

TiMER (here's a link to the official site) is a romantic comedy with a high concept SF hook. It was written and directed by Jac Schaeffer and stars Emma Caulfield as Oona O'Leary, a woman in search of her soul mate. You can read the full story blurb here, but since it's kind of long I'll summarize.


A TiMER is optional. However, the more people who purchase a TiMER, the more likely soul mates will connect with each other. For those who find their soul mate via a TiMER, the payoff is that science takes the whole work out of the process. In other words, you know you're meant to be with this person and thus any concerns about compatibility are moot.

When the story opens, Oona has been searching for her soul mate for some time. She really buys into the promise of the TiMER and becomes frustrated as she goes through a series of potential partners, none of whom end up being her soul mate. With her biological clock ticking, she faces a decision: how long should she allow the TiMER to dictate her love life?

As far as production values, this is a low budget film so I adjusted my expectations accordingly. The SF elements were streamlined and hokey, which made sense given the comedic angle. I felt the opening scene was raw, but the rest of it proceeded more smoothly.

I had strong mixed feelings about TiMER. The premise is interesting, but the execution was flawed in places. Here are my non-spoiler observations:

The film satirizes marketing and so the commercials for the TiMER features lots of beautiful people in pretty settings sharing idyllic testimonies about finding their soul mates. According to the director, the stores where characters buy TiMERS are inspired by "cell phone distributors." So that was clever.

The story explores a few different themes, for example, it questions whether the TiMER takes the spontaneity out of love. If you're TiMER is counting down to the day when you'll meet your soul mate, do you abstain from sex? Or does it become an excuse to sow a few wild oats before settling down (for either gender)?

The film featured the usual parade of pretty Hollywood actors (and so the lack of "ordinary" looking people represented another missed opportunity). There was one Hispanic soul mate, but multi-cultural this story is not. It didn't explore the technological divide, either. The TiMER costs $79.99, with monthly service payments of $15.99, but is that an affordable price for everyone?

Science, as symbolized by the TiMER, is kind of the villain because even though the TiMER is supposed to take the work out of love, it's still a harrowing journey for many people, including the heroine. The concept of science as evil isn't unusual, but given TiMERS are an integral part of many characters' lives I would have liked to encounter more exploration about the pros of this technology.

TiMER is a conflicted story IMHO. It satirized the idea of soul mates yet some couples seemed to benefit greatly from it. Additionally, the heroine's mother is depicted as a reader of romance novels. Yet she was described as "crazy" by the heroine (and lovable, but the crazy part came first). The film didn't seem sure about whether it wanted to satirize the romance genre or celebrate it. And I detected a slight condescension toward the soul mate concept as used in romance, as if the film had concerns about readers who enjoyed it purely as a fantasy.

The biggest issue I had with TiMER was the ending. I'm not going to spoil it, but it implies something that completely undermines what came before. The resolution is closer to a Happily For Now rather than a Happily Ever After, but even the HFN is barely there--about 5%.

TiMER does have a science fictional concept and a romance, but the ending made me wonder if writer-director Jac Schaeffer was unsure about which genre convention she wanted to follow for this story. The ending waffles between a HFN and something else. I can't recommend this film to romance fans who expect an HEA since the ending might make many of them upset, but viewers who enjoy romantic SF and don't mind ambiguous endings could certainly take a risk.

TiMER kept things moving and there was never a dull moment, but it never quite gelled for me. There were too many unanswered questions. The problematic subtext and inconsistent social commentary were issues that, for me, kept this film from being a more powerful examination of contemporary romance.

TiMER claims to explore "…the exhilarating and unpredictable hot mess that is love," but I got the sense it was more about being burned by love and the soul mate concept.

If you've seen this film, what did you think about it?