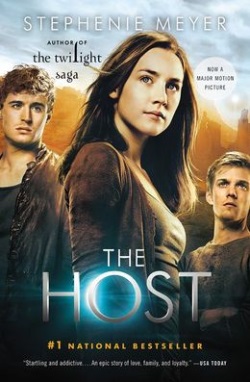 Well, THE HOST is out now, but unfortunately the numbers aren’t impressive. According to Box Office Mojo:

In sixth place, The Host opened to a meager $11 million from 3,202 locations. That's about on par with what Beautiful Creatures grossed in its five-day holiday opening last month, and is a fraction of the first Twilight movie's $69.6 million start. While The Host didn't get much of a push in recent weeks, it did have a teaser trailer attached to The Hunger Games last March, which suggests that distributor Open Road Films did have very high hopes for it at one point...

...The Host's audience was 78 percent female and 61 percent under the age of 25 (a bit younger than Twilight's typical crowd).

On the heels of that report, I came across a Twitter conversation between Katiebabs (Babbling About books, and More!) and Ceilidhann (Kayleigh Anne of The Book Lantern) in which they exchanged opinions about why THE HOST debuted with such a lackluster turnout. What struck me in particular was this comment:

But they have a massive fandom. The Host sold really well but the fans aren't dedicated like Twi-hards.

That’s a valid observation and one of the reasons SFR, even with a major motion picture on its side, has yet to attain wider appeal. In general, the fandom for SFR is older and fractured while the one for Twilight is younger and cohesive. There are pockets of hardcore and dedicated SFR fans, but they’re more like scattered dandelion fluffs than a highly orchestrated flock of birds.

THE HOST is science fiction romance, and perhaps Twilight fans weren’t ready to make the jump. Why? I can only speculate, but from what I know the story doesn’t feature the core Twilight dynamic, i.e., a romance about a worldly hero with a fiendishly possessive love for an innocent/ordinary heroine. That's also a popular trope in adult romances, e.g., 50 SHADES OF GRAY by E.L. James and BARED TO YOU by Sylvia Day.

And hmm, if the people seeing THE HOST were trending *younger* than Twilight's "typical" fans, does that mean adult women over the age of 25 were basically driving Twilight fandom and aren't as interested in the fantasies offered by SFR?

In light of the fact that the author is the same person, with all the leverage her status implies, the difference in romance dynamic is a factor to take into consideration when evaluating the success of THE HOST against TWILIGHT. Twilight readers and moviegoers weren’t necessarily seeking another vampire romance, just a similar romance dynamic. And from what I've gathered, THE HOST delivers something different.

Now I'd like to direct you to an observation made by Charlee of Smart Girls Love SciFi & Paranormal Romance in a recent comment thread at her blog:


...[SFR] is a little like an isolated native tribe in the amazon. By exposing it to the outside you will enevitably change it. If you want the subgenre to be popular to the mass audience you have to accept that it will morph into what they demand and that may not be what long-time fans would want.

So if readers of mainstream romances are saying--with their hard-earned money--they want the core fantasy offered by TWILIGHT, 50 SHADES OF GRAY, and BARED TO YOU, what would happen if SFR met the legions of adult Twilight fans halfway? Has anyone written the sci-fi romance equivalent of these stories? Are there any billionaire alien heroes-innocent/virgin Earth heroines on deck? Is the female sexual awakening fantasy and its variants so compelling and popular it demands reinvention over and over and over?

I’m not sure what all of this means for sci-fi romance in general, except that it will probably have to work twice as hard to attract readers even if authors were to jump on the current bandwagon. What do you think--should some authors take the plunge?