Susan Grant's nine earliest books have been re-issued and are now available from Kindle, Nook, iTunes, and Kobo, as well as Smashwords, in both the US and worldwide. Eight of the nine are science fiction romances. Susan Grant is a longtime author in this subgenre, so it's a great opportunity to revisit her stories or discover them for the first time.

Here are the titles and brand new covers! 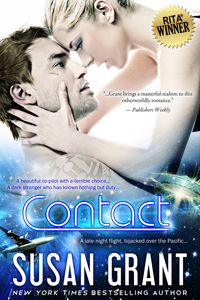 A beautiful co-pilot with a terrible choice…

A dark stranger who has known nothing but duty...

From the winner of the Daphne Du Maurier award for romantic suspense comes a tale of intrigue and passion where an airline pilot on a trans-Pacific flight finds her 747 hijacked by a UFO and a enigmatic member of their crew the only one she can trust. 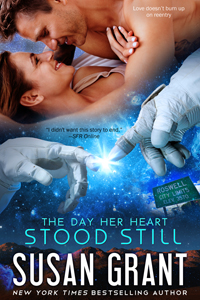 Astronaut Andie Del Sarto has everything a woman could want...except someone to share it all with her. Logical and driven, and determined to be the polar opposite of her exasperating UFO museum-owning mother, Andie makes sure no one is listening when she makes a wish on a falling star, confessing her secret longing to fall in love. Except that shooting star isn't a meteorite at all; it's a spaceship carrying an alien hunk of a galactic explorer named Zefer —and she's just brought him down to Earth! 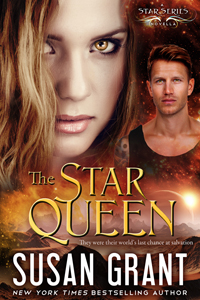 A novella, The Star Queen takes place 11,000 years before the Star series books begin. On the decimated planet of Sienna, two lovers struggle to survive and drive out ruthless warlords who have enslaved their people for generations. Together, Romjha and Tai will rebuild their demolished civilization…and begin a star-spanning dynasty with their love. 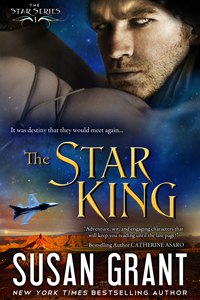 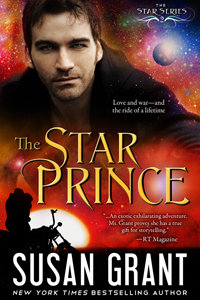 Earth guy Ian Hamilton is studying for a finance degree when his mother marries the king of the galaxy. But when his stepfather unexpectedly chooses him as his successor, the new crown prince, Ian is thrust into a world he never envisioned, complicated by a court-load of scheming royals who don't think he belongs there, either. And if that’s not enough, an independent-minded princess-in-peril lands in his arms, on the run from the very laws he’s pledged to uphold. Outmanned and outgunned, he’s a fish out of water. Only allowing himself to be overwhelmed is not an option. It seems that the entire kingdom is hurtling toward war, and he’s the only one who can stop it. 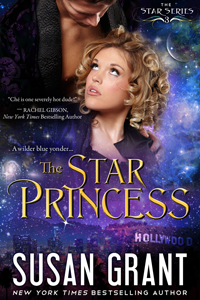 THE LEGEND OF BANZAI MAGUIRE 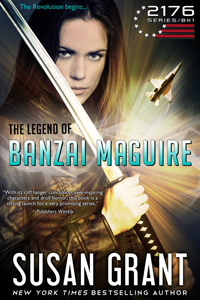 The year: 2006. The mission: routine. Or so U.S.A.F. pilot Bree "Banzai" Maguire thinks. Then she's shot down over enemy airspace, captured and put in bio-stasis. When she wakes, everything's changed. It's one hundred and seventy years later--2176--the world is in crisis, and she's a hotly contested prize. Once, Banzai's job was to protect democracy; now a mysterious voice claims she must bring it back.

Two men vie for her heart. Kyber, her captor, the rich, ruthless Emperor Prince of Asia, has all a man could desire. Then there's U.C.E. SEAL commander and would-be rescuer Ty Armstrong. He has all the right moves. With two such choices, Banzai regrets she has but one heart to give for her country. 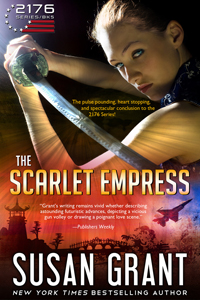 Shot down over Korea, modern-day USAF fighter pilot Cameron "Scarlet" Tucker is put in bio-stasis. She wakes 170 years later. Her wingmate and best friend also survived: Now the "legendary" Banzai Maguire, Bree is being held for treason in the country that was once her beloved United States.

Cam has problems of her own. She’s in the masterful hands of Prince Kyber, the dictator whom her friend thwarted. He won’t get fooled again. With the mysterious Shadow Voice urging revolution, and her friend in chains, Cam wants the sexy emperor on her side--and maybe a whole lot more. But her role in the thrilling mission to save her country has to come first. Banzai wouldn't surrender, and Cam won't either. It's time to give a royal butt kicking, and Cam knows just where to start.