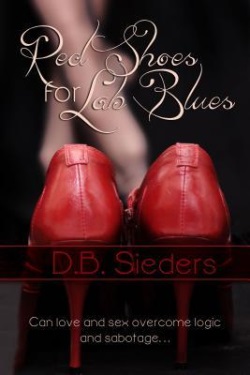 I mean, you can't get any clearer than that. :)
However, once I learned about Little Birdie's impressions and read the story blurb, I became intrigued by the possibilities. Perhaps RED SHOES FOR LAB BLUES is an undiscovered science fiction romance. Take a look at the blurb:

Can love and sex overcome logic and sabotage…

Then along comes Dr. Henry Chan, the department’s new rising star. Henry is smart, handsome, and confident. He’s also captivated by the enigmatic Dr. Jamison, who seems oblivious to her own charms. But will Henry risk his heart when the research project is at stake?

A rival drug company, an insider with a personal grudge, and militant animal rights protestors force everyone’s plans into disarray. Can their love overcome everything being thrown at them?

The potential science fictional element that jumped out at me was this line: "She just has to prove Compound Z kills cancer cells." Therefore, I began to wonder if the book fell into the category of mundane SF. Let's review that definition:

The Mundane SF movement, inspired by an idea of Julian Todd, was founded in 2002 during the Clarion workshop by novelist Geoff Ryman among others.[1] It focuses on stories set on or near the Earth, with a believable use of technology and science as it exists at the time the story is written.


RED SHOES FOR LAB BLUES features a heroine and hero working on a new treatment for cancer (breast cancer was mentioned specifically in the story) in a contemporary setting. So that aspect meets the criteria of mundane SF as "focusing on stories set on or near the Earth, with a believable use of technology and science as it exists at the time the story is written."

Upon reading the story, I was excited to encounter all sorts of scientific jargon (without the infodumping). There are numerous references to laboratory procedures, experiments, and lab equipment. Many of the terms were new to me, but that only increased my interest in the story. I'm unfamiliar with the ins and outs of cancer research, but the book left me with the impression that the author did a thorough job with the worldbuilding.

Structure-wise, the story begins by setting up the heroine and her goals. Then it proceeded to alternate between developing the external plot and the romance. There are also lab politics and some mild suspense elements.

The heat level is steamy, but non-erotic. I think D.B. Sieders was trying to titillate me with her scientific jargon instead, hyuk!

Another cool element about the story is that it features an interracial romance (the hero is Chinese). I particularly enjoyed how he articulates his attraction to the heroine. I'd pull a quote for you, but I don't want to spoil anything.

In fact, the more I read, the more I realized just how much stuff was packed into this story. The way RED SHOES FOR LAB BLUES straddles multiple genres and explores various scientific and social issues is part of its appeal. I hope it finds a good-sized audience.

My conclusion? RED SHOES FOR LAB BLUES is certainly a contemporary romance, but I believe it also falls under the umbrella of mundane SF, albeit on the lite side. I certainly wouldn't mind reading more SFRs like this one.

What do you think about categorizing RED SHOES FOR LAB BLUES as, in part, a mundane SF, at least based on the blurb? If you've read this story, do you think it's an SFR story flying under the radar or strictly a medical-themed contemporary?