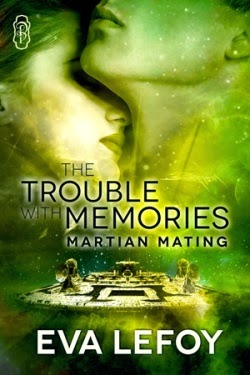 A few months ago, I'd read Eva Lefoy's stories in TENTACLES: AN ANTHOLOGY. This collection features four tentacle-themed science fiction and fantasy shorts (light horror elements, non-romance). The author penned "Solar Pioneer" and "Zaural." I enjoyed them both, and was subsequently jazzed to learn she has a new science fiction romance out called THE TROUBLE WITH MEMORIES (Decadent Publishing). It's the first in her Martian Mating series.
You can enter for a chance to win a PDF copy of this novella-length story! Details follow the cover, blurb, and my non-spoiler tags.

Lieutenant Lucy Borasco has her phase pistol ready and her ex-boyfriend in her sights. She has every intention of making him pay for choosing his career over her. But she hadn’t factored in a Martian sneak invasion, Cal’s incessant need to save the universe, or the risk of permanent damage to her complexion. Getting Cal back will cost her more than she thinks, leaving her changed forever.

Captain California Sykes’ memories are gone, his career is in ruins, and his ex-girlfriend nearly kills him with a kiss. Can he overcome the Martian invasion, save the rest of the team and win Lucy back again in the process? Or will his seat-of-the-pants plans and the canned fish rations cost him everything he holds dear, including his sanity?


*The romance is one of "reunited lovers." It has an accelerated pace, but that might work for readers who also enjoy lots of action-adventure in their SFR. As a result of this story's external plot, the overall theme is "love against the odds" (as opposed to intense interpersonal conflict), especially during the second half of the story.

* The amnesia obstacle is a tried-and-true romance trope, but the one featured here is more involved than Cal simply bumping his head. It impacts the external plot more so than the romance plot IMHO (I mention that in case there are readers who have a preference for how amnesia plots play out. :) )

*far future space opera setting. Worldbuilding is of the "It's the far future, and Earth has colonized Mars and other planets" variety, meaning the story assumes the reader would pretty much be able to fill in the details.

*military setting (hero is a pilot)

*This story features two antagonists. One is cut from the cloth of Snidely Whiplash and the other is more nuanced. In other words, don't go into the story expecting a typical "Martian invasion" type of element (i.e., space battles). The Martian threat is more subtle and Trojan horse than what the blurb phrase implies.

*Walloping websnappers! THE TROUBLE WITH MEMORIES includes frequent interjections like "Helium toads!" They and the heroine's snarky dialogue lend the story a lighthearted tone. It's suitable for readers who enjoy breezy action-adventure sci-fi romance and exclamations such as "Holy radioactive quasar" (my personal favorite and it made me suspect the author had her tongue firmly planted in her cheek while writing this story).

*The story opens with one very emotionally conflicted, red-haired heroine. She doesn't know whether to punch the hero or jump his bones.

*the core science fictional concept of the story isn't anything new, but has its own twist. I especially liked how it affected one of the characters in the second half of the story. It's an element I'd definitely like to read more of in sci-fi romance. To go into further details would constitute spoilers, sorry!

*The series is called Martian Mating, but that wasn't the central focus of this story (your mileage may vary). Based on the excerpt I read of book 2, though, seems like there's some breeding/Mars Needs Women action ahead.

To enter for a chance to win a PDF copy of Eva Lefoy's THE TROUBLE WITH MEMORIES, leave a comment for this post. Just say hi, or recommend your favorite Martian-based SF/SFR story!

The deadline to enter is midnight EST on Friday, January 24, 2014. Check back here to see if you've won!